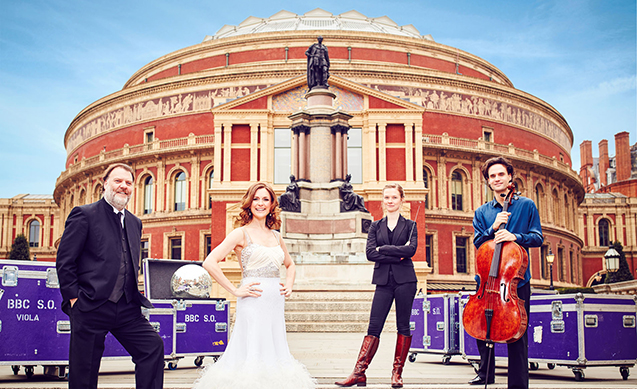 We’ve asked PRS for Music’s classical account manager Harriet Wybor to scour the bulging Proms 2016 schedule to give us her top picks.

We’ve asked PRS for Music’s classical account manager Harriet Wybor to scour the bulging Proms 2016 schedule to give us her top picks.

The annual celebration of classical music opens tomorrow (Friday) at the Royal Albert Hall, London, offering countless opportunities to experience live music at its very best, both within the capital and around the UK.

To the uninitiated, the programme may seem bewildering, so let Harriet guide you through the highlights (scroll down to tune in to her accompanying playlist) - at £6 a pop for on-the-day Promming tickets, you can’t go wrong.

Prom 16
27 July, 7pm, Royal Albert Hall
Hear the world premiere of Michael Berkeley’s Violin Concerto, a BBC commission, with violinist Chloë Hanslip and the BBC National Orchestra of Wales, conducted by Jac van Steen. The programme also includes Prokofiev’s celebrated ballet, Romeo and Juliet, one of a number of works included in this year’s Proms to mark the 400th anniversary of Shakespeare’s death.

Prom 39
14 August, 7.30pm, Royal Albert Hall
Sakari Oramo conducts the BBC Symphony Orchestra in the world premiere of a BBC commission from Charlotte Bray, Falling in the Fire. Featuring cellist Guy Johnston, it is an expression of ‘moral outrage’ at the destruction of Palmyra, Syria, after which ‘everything changed’ in the composer’s compositional output. The programme also includes symphonies from Haydn and Mahler. Hear Charlotte Bray in conversation at Imperial College London beforehand (5.45pm), discussing her influences and inspirations.

Proms at… Roundhouse, Camden
20 August, 3pm
This year the Proms are revisiting the Roundhouse with a programme reflective of its popularity as a contemporary classical venue in the 1970s. Andrew Gourlay will conduct the London Sinfonietta in Ligeti’s iconic Ramifications, alongside works by Sir Harrison Birtwistle, Georg Friedrich Haas and the world premiere of a BBC co-commission from David Sawer which reflects the energy and physicality of dance.

Proms 64 & 66
2 September, 7pm and 3 September, 7.30pm, Royal Albert Hall
Sir Simon Rattle conducts the Berlin Philharmonic in two Proms, the first commemorating the great Pierre Boulez with Éclat, followed by Mahler’s Symphony No. 7. The second presents the UK premiere of Julian Anderson’s Incantesimi, alongside Dvo?ák and Brahms. Two fantastic opportunities to hear the Berlin Philharmonic under Rattle before he joins the London Symphony Orchestra as Music Director in 2017.

Read our interview with Harriet, where she shares her thoughts on the current state of the contemporary scene and how composers can get the most out of their PRS for Music membership.