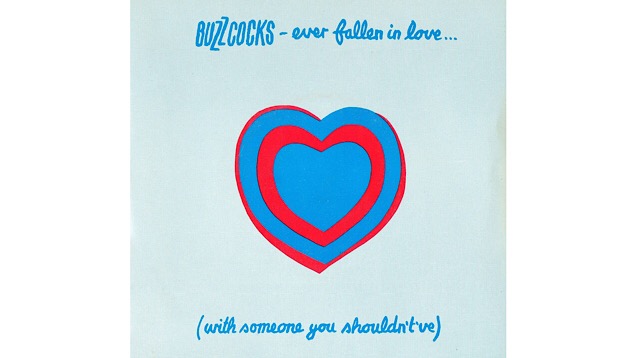 Ever Fallen In Love, Buzzcocks

Have you ever fallen in love with someone you shouldn’t have? On the most romantic day of the year we publish our interview with Pete Shelley, writer of the Buzzcocks hit. He has a photographic memory about the creation of the song — well, the lyrics, at least.

Have you ever fallen in love with someone you shouldn’t have? It’s now more than three decades since Pete Shelley penned the words for Ever Fallen In Love, but the native Mancunian has a photographic memory about the creation of the song — well, the lyrics, at least.

‘We were on tour in Edinburgh on a day off. It was 4 November 1977,’ begins Pete. ‘We’d just been for a haggis supper and had made our way back to our guest house. Back then, of course, you didn’t have televisions in every room — and there were only three channels on TV — so we were in the lounge at the guest house drinking some beer and Guys and Dolls just happened to be on.

‘One of the characters in the movie — Adelaide, I think her name was — says the line: “Have you ever fallen in love with someone you shouldn’t have? Wait until it happens to you.” It just struck a chord with me because I think that’s something that everyone can relate to.’

As Pete mulled over the phrase in his mind, the idea for a song started to take shape. He continues: ‘The next day someone had to go to post a parcel at the post office, so while I was waiting outside in the Transit van, I wrote the lyrics to the song. When you write any song like that you usually have someone in mind, so yes, there were a couple of individuals I was thinking about when I was writing the song.’

As for what is arguably The Buzzcocks’ best known song, Shelley’s recollection of composing the lyrics remains vivid; the same cannot be said for the accompanying tune.

‘Funnily enough I can’t remember when I wrote the music for the song,’ he admits. However, he does have something of an excuse. ‘Usually I write the music first and then come up with the lyrics, but this was the exception to the rule. In fact, I don’t normally finish the lyrics until I’m in the studio because it’s only at the point of the recording that things are set in stone.’

Nonetheless, Ever Fallen In Love stands up as one of the most enduring songs of the 70s and its popularity among fellow musicians is testament to Shelley’s craft.


‘I usually find out about a cover version when I hear it,’ he reveals. ‘For instance there was a version by Thea Gilmore used in an episode of Holby City recently. Or there was the time I bumped into Roland Gift in a shop and he told me Fine Young Cannibals were recording a version for a film.’

Others to have covered the song include Pete Yorn, Thursday, Anti-Flag, Anorak and Stiff Dylans, while the track has been used in a coffee advert and has proved a hit in selling products at home and abroad.

‘It was covered by French band Nouvelle Vague, for use in an orange juice commercial in Poland,’ says Pete, underlining its universal appeal. He concludes: ‘The song has taken a life of its own and it always is a significant part of my PRS statements, so it remains a favourite of mine…'

The band’s profile has undoubtedly been boosted in recent years too by the hit BBC show Never Mind The Buzzcocks, but Shelley reveals there is a downside to that notoriety.

‘It makes doing searches for the Buzzcocks on Google difficult,’ he smiles. ‘I actually got to go on the show in 2000 and I had a really good time, but I never got to see the programme when it was broadcast.’ But the popularity of the show sometimes prompts a double-take. ‘I saw a headline recently that Bill Bailey had left the Buzzcocks — I never knew he was in the band!’ he laughs.
Features
Back to top