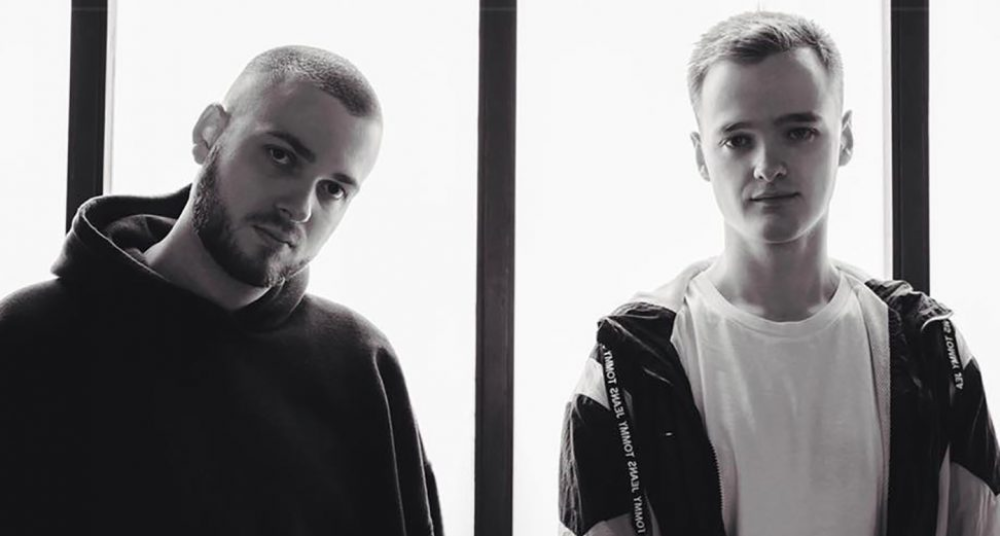 Duke & Jones: 'The first thing Louis said to us was, “Twenty years and all it needed was the right beat”’

You know Duke & Jones’ work, even if you aren’t directly aware. It’s been everywhere lately, but will be especially familiar if you spend any time at all on TikTok. Their track Jiggle Jiggle, in which Louis Theroux raps about driving around in a Fiat over a laid back beat, has reached the kind of viral heights most producers can only dream about. But their partnership didn’t exactly have an auspicious start.

‘We’ve been producing together now for about 12 years,’ says Luke Conibear, the ‘Duke’ half of the equation. ‘You know when you’re really young, and it’s New Years Eve and you can’t go to anything cool, so your parents drag you to whatever they’re doing?’

He nods at Isaac McKelvey – the ‘Jones’ half – with a grin. ‘I got dragged to his house, and I was very reluctant to go because it was pretty boring. The thing is, we weren’t friends in primary school but we’ve known each other, technically, from before we were born because our families are friends. We just kind of sat there like, “What do you in your spare time?” And he said, “I make beats.” And I was like, “Oh no way, me too.” So we went upstairs and made the worst beat of all time, and that was probably 12 or 13 years ago.'

That initial session, questionable though the beat it produced may have been, led to the duo going round to each other’s houses every weekend for the following years until Isaac went to university in 2016.

‘When he got back, we didn’t officially say it but it kind of had the vibe of, this has to happen in the next year, something needs to develop, or we should probably start looking at different careers,’ Luke says.

Remixes for Marshmallow, Zed and others followed, which was enough to get the ball rolling.

‘We nearly made enough to pay tax,’ Isaac laughs.

The pandemic slowed things down, but it also allowed Duke & Jones time to refocus. They planned out the next few years, and found their feet on TikTok, having adopted it comparatively early in October 2019. But even with experience, it can be hard to predict just how successful a clip on the platform will become. There are some criteria that make a sound more likely to take off, but some far exceed expectations. Jiggle Jiggle was one of those.

‘It took fifteen minutes to make and the video took about five minutes to edit. Thought nothing of it, went to the pub, came back from the pub, and posted the video.’

Louis Theroux’s rap on Amelia Dimoldenberg’s Chicken Shop Date was already going viral when Duke & Jones got involved. By now, Luke has the story down to a T. ‘My friend came round for lunch, and he brought a pie and the pie took 15 minutes to cook. While he was unboxing it, he was like, “Have you seen Louis Theroux on Chicken Shop Date? He’s rapping on it, you should do that for your autotune series.”’

It seemed like a good idea right off the bat. As Luke points out, everyone knows Louis Theroux, and Chicken Shop Date is a cultural force in its own right. While the pie was in the oven, he got to work. ‘I was kind of showing off,’ he says. He raced against the timer, and when the food was ready Jiggle Jiggle was too.

‘It took fifteen minutes to make and the video took about five minutes to edit. Thought nothing of it, went to the pub, came back from the pub, and posted the video,’ he says.

Initially, the video did ‘alright’.

The previous week, Duke & Jones had released a remix of Miranda Cosgrove’s ‘What’s your favourite curse word?’ viral moment, which looked set to be their big hitter for the year after it reached 6.2 million views in the first week. But they had to delete the video after receiving a polite legal notice, and initially Jiggle Jiggle did not seem set to reach the same heights.

‘It did 60k in the first week, so it looked like it kind of stalled,’ says Luke.

But fate course-corrected in the form of Brooke and Jess, professional dancers who also have a strong TikTok following.

‘They did the dance, which everyone knows now, and they uploaded that and people started doing the dance, and it just caught on like wildfire,’ Luke says. ‘I think it got to about 20 million views and we were like, “Alright, I wonder if Louis would be down to re-record this and get it done properly?” So we emailed him.’

‘We tried to see if we could get his blessing to release the one that was ripped off Chicken Shop Date, but people had been asking for an extended version, and we made one using a rap he did on Russell Howard which was about Queen Elizabeth,’ says Isaac. And he said, “Yeah I really wanna release this, I like it, but the second verse has got to be from that song about driving around in the Fiat. We need to use that.”’

The second verse didn’t make the final cut of the BBC episode of Weird Weekends that Louis initially performed the rap on, and he didn’t repeat it on Chicken Shop Date. Duke & Jones invited him down to the studio to record a new version, which Isaac says he did ‘between filming a documentary and picking his kids up from school.’

‘At the start we were introducing ourselves properly, and we were informing him of just how viral it was going, because I don’t think he knew. Obviously he knows now how far it’s travelled, but we told him that they're singing it in Brazil and Asia as well as the UK. And he said, “What? How is this happening?” He was getting stopped in the street by people asking him to do the rap and he was like, “What rap?”’ Luke says.

‘This girl stopped him and said, “You’re famous aren’t you?”’ says Isaac. ‘He told her, “Yeah, I make documentaries.” She’s like, “What documentaries? I know you from TikTok.”’

‘It apparently really, really tickled Louis that Neil Diamond had to sit down and listen to him sing it horrifically and then say, “Yeah, that’s fine.”’

Isaac and Luke laugh about it now, but the two of them were worried for a while that they had broken one of the UK’s cultural treasures.

‘One of the first questions we wanted to ask him was, have we made your life bad?’ says Luke. ‘Because obviously we’re big fans of Louis, so in no way did we want him to despise us for making this thing. I’ve asked him three times now because I keep getting scared. He’s reassuring us that he loves it, and he finds it incredible that it’s resurfaced.’

‘I think the first thing he said to us was, “Twenty years it’s taken, and all it needed was the right beat!”’ Isaac laughs.

The history of Jiggle Jiggle has somehow expanded to include pop cultural touchstones from a dizzying range of areas. Aside from starring one of the nation’s pre-eminent documentary makers, the track has been performed by Snoop Dogg, featured on Loose Women and the Tonight Show, and was recently released as a remix and music video featuring Jason Derulo. The rap also includes a lyric sample from UB40’s Red Red Wine, originally written by Neil Diamond, which required copyright clearance.

‘It apparently really, really tickled Louis that Neil Diamond had to sit down and listen to him sing it horrifically and then say, “Yeah, that’s fine,”’ says Isaac.

All this because, essentially, somebody came round to cook a pie. With new viral sounds practically appearing by the hour, it can be hard to sift through what will stick and what won’t. Jiggle Jiggle was a clear choice because, as Isaac points out, the original clip checked plenty of boxes.

‘There was no background noise, no music to filter out or anything because Chicken Shop Date is supposed to be awkward,’ he says, ticking off the points on his fingers. ‘Then it usually helps if they’re famous, and if they’re actually rapping or singing, or just talking rhythmically in the clip. So obviously for Louis it was just tick, tick, tick. There are things you look for. Then there are just things that are popping off on TikTok.’

‘You think that they say, “To me, to you,” a lot more than they actually do,’ Isaac says.

‘They say it once and it has loads of music behind it, and it didn’t work at all and I couldn’t take any more. So I watched loads of episodes and by the end I was just like, "Oh god,’ Luke says.

Sometimes, having the viral-hit golden touch can be a blessing and a curse.

With Big Brother set to return on ITV2 in 2023, M Magazine spoke to Andy Gray about composing one of British TV's most memorable themes.