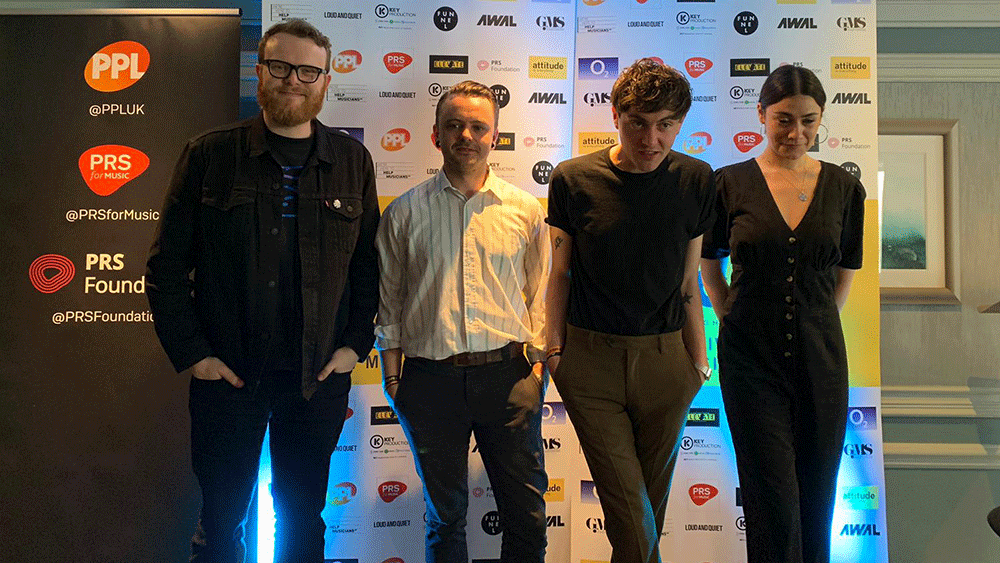 What we learned from LIFE and Nadine Shah at The Great Escape about navigating the DIY route and how they've built successful careers.

From the raucous live shows of Hull fourpiece LIFE to the powerful post-punk of Mercury Prize nominated Nadine Shah, both are independent forces to be reckoned with.

In a Great Escape panel presented by PRS for Music, PPL and PRS Foundation today (Friday), Mez and Stew (LIFE) and Nadine joined BBC Radio 1’s Huw Stephens to talk about their DIY approaches and how they have built careers so far.

Stew: It’s important for us to have a human connection with the people we are working with, and not just on an industry level.

On building your own momentum

Stew: Where we come from there isn’t a music industry, so we always felt quite disconnected from all of that. You don’t grow up choosing to sign to a label – you don’t know what a label is, what a publishing company is. You don’t have a choice, you DIY out of necessity. If you don’t do it no one else is going to do it for you. We had to set up a label, get our own gigs, and clubs. We had to open our own record shop and run a free studio for the community. We started providing things because they weren’t there. The only way of getting on with it is by making it happen.

On getting invited to tour with Slaves

Stew: We got to tour with Slaves off the back of a tweet we sent them. Laurie liked it and retweeted it, then messaged us back. Then they did a show in Hull and invited us to play. Afterwards Laurie messaged to say he couldn’t stop listening to our music and would we like to tour Europe with them. We became really close friends after that.

On the financial barrier for new artists

Stew: It’s such a sad situation that loads of artists can’t really get themselves out there because of the financial barrier. If we didn’t have a couple of friends to chuck in some money to support us on the Slaves tour, we wouldn’t have got out there ourselves. We were really lucky.

Nadine: Touring is so expensive when you’re starting out, especially as a solo artist. I remember for my first tour I didn’t know that I could get money instead of the rider. I’d much rather get the money now, the £40 or £50, but I didn’t know that was even a possibility then. So, every night I’d get a bottle of Amaretto, a crate of beer, some wine… I was only 21 or 22, it was crackers. It wasn’t good.

On drinking on the job

Nadine: I can’t get drunk before a show anymore because that’s doing the fans a disservice, it makes me look like a bloody idiot and it’s not cool.

Stew: I think bands are getting better at talking about it and not keeping it in. We’ve lost friends through suicide, and people are realising this is serious shit. Bands like IDLES are really good at supporting each other. As they’ve got bigger they’ve had to rein it in, be calm and healthy.

On wearing your heart on your sleeve

Mez: You’ve got to live within your means and portray who you are. As an artist you should write about what you feel and the things that are affecting you in your daily life as it connects better with people. Our second record is very much like that. It’s very introspective. We tried to be brave and I think it resonates with more people because, at the end of the day, it’s real. Don’t shy away from anything that affects you – you should talk about it.

Nadine: I don’t use it anymore. There’s a ban on me using Twitter while drunk. You have a responsibility as an artist and sometimes people take what you say as gospel.

Mez: Social media has had a massive affect on the whole of society. It doesn’t matter how many likes you have – it’s not healthy. It is about being the best you possibly can, but really, everyone is the best they can be because they’re real. That’s what we should embrace, not unobtainable images.

On applying for PRS Foundation funding

Stew: Know exactly what you want to do and have a really clear timeline and budget. Anyone who’s going to give you a lump sum of money needs to trust you’re going to do a good job with it.

Don’t over-stretch yourself – funders would rather see a realistic and obtainable plan. Do your research and don’t rush your application.

The process of applying is equally important, even if you don’t get the funding, because you’ve made a business plan. It’s never a waste of time.

Also, ask for feedback if you weren’t successful. PRS Foundation are really good at letting you know why you didn’t get funding, which can help you a lot next time you apply.

On having a job outside of music

Stew: We still have day jobs and we’re not ashamed of saying that because it’s the reality – we’re skint. We don’t have anything to hide or lose – or anything to prove. We make money from the band, and it’s looking after itself, but it’s not enough to pay four people the minimum wage. We have to work. Mez has got a two-year-old son, we’ve got mortgages, so we have to do these things. It’s not ideal – it’s exhausting, but it makes the rewards feel all the bigger.