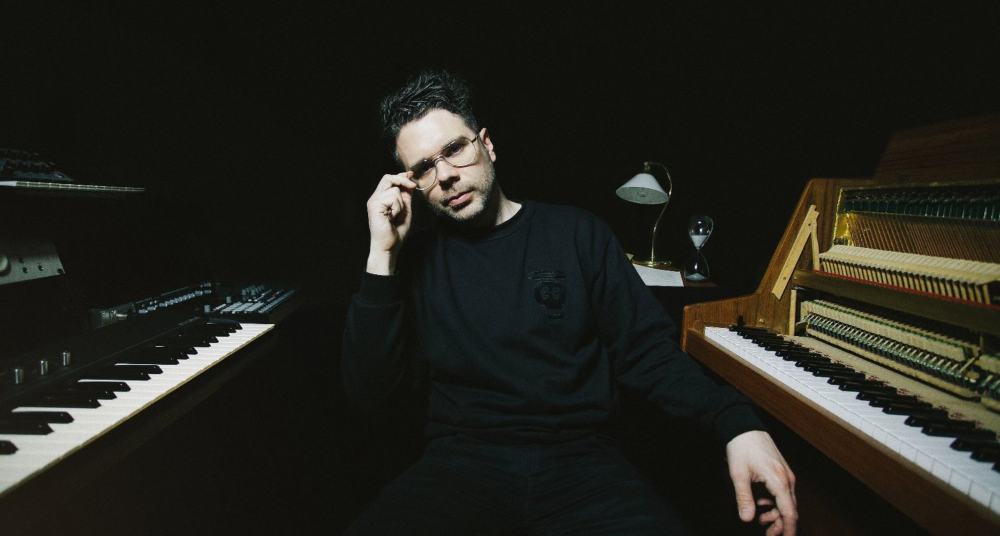 In many ways, Dan Samsa is not what you’d call a traditional composer. Classically trained with a deep technical skill, Dan has spent a lot of his career creating at the intersections of genres and mediums. He is also a producer and sound artist, and much of his work involves immersive technologies and unique uses of physical space. Today’s space is the Church of the Ascension Blackheath, where he is working on a piece inspired by the career of the legendary composer as part of PRS for Music’s Refractions initiative.

Refractions celebrates Philip Glass in his 85th birthday year, highlighting the impact his work has had on composers and the music world at large. As part of a partnership with Philip’s publisher Dunvagen Music and Orange Mountain Music, the record company created to serve fans of Philip Glass, four composers were selected to respond to his vast output by creating a new piece using his material as a source.

Dan’s piece reworks the material from the ground up, as he re-records a dizzyingly large sweep of Philip’s catalogue using his own immersive sound techniques. It’s a carefully considered method. Dan has gone deep into the archives, ultimately developing an approach that mirrors some of what he appreciates most about Philip Glass’s life and career.

‘He’s had a phenomenal career and a phenomenal life,’ says Dan. ‘What interested me was his mother was a librarian and his father sold records at the record store. [They were both] kind of collecting and categorising things, and I think you can hear that within his music and within the huge body of work that he’s produced over his lifetime.’

'What I hope we’ll hear eventually is this sonic brushstroke of his career through this time and space.’

‘I can’t imagine ever getting near the amount of work that he’s produced, purely because I’ve been too lazy for half my life,’ he laughs. The approach he’s taking today is anything but lazy. Having meticulously combed through Philip Glass’s back catalogue with that same curatorial eye he noticed in Philip’s family background, and using the 85th birthday celebrations as a jumping off point, Dan has settled on 85 pieces to re-record and rework into a new form.

‘I started collecting, downloading the music and then matching it up with the dates and trying to get a spread of pieces that spanned his working career from the mid-60s to now,’ he says. ‘Then I decided to take a fragment of each of those pieces and notate it and transpose it into a key which fits with all the other fragments.’

It’s a painstaking process. Once the pieces were all in a coherent key, Dan reworked them into the same tempo and began to layer the tracks together. Then, he divided the composition into decades, each containing more fragments than the last to reflect Philip Glass’s increasing productivity over the course of his career.

‘The first section is six segments, and that’s kind of his career in the 60s and early 70s. Then we’ll move to the next section, which is nine fragments, and then I’m adding three each time. If I add a few extras to the last one, it eventually adds up to 85,’ says Dan. Today he’s divided the church up into six segments. He directs violist Alison D’Souza around the room in a pattern as she plays each part of the composition.

‘We’re kind of carving up the church using different patterns, so it cycles around the whole space each time,’ he says. ‘We’re making sure that we pass closely by the microphone so we get this nice, 3D spatial effect when its edited. What I hope we’ll hear eventually is this sonic brushstroke of his career through this time and space.’

It’s an ambitious vision. Certain things have to be taken into consideration when using a non-traditional recording space like this one. Particularly in urban spaces, background noises can be a challenge to filter out if the building wasn’t intended to be completely soundproof. Church of the Ascension Blackheath is set back off a quiet street in a residential area, which lends itself particularly well to this kind of project. Spaces like these bring their own qualities to the recordings, which means that the location has to be just right for the piece.

‘I’ve used a similar technique in Southwark Cathedral before, and it’s an incredible space – it’s massive and the acoustics are phenomenal. But what you do get is a lot of background city noise. Actually, I really enjoyed that – you get the beeps and the trains and sirens and things like that, and that became part of the music. But this time I really wanted to be more focused on what’s happening in here,’ says Dan.

What’s happening in here is absorbing. Dan has created soundscapes using this technique in the past, putting on performances at venues such as The Albany in Deptford and at ARRAY music festival. His work often incorporates electronic elements, and is regularly inspired by the rhythms and beats of UK Jungle. This embrace of technologies gives a unique edge to his composition work, and in this case reflects the open-minded creativity of Philip Glass and his contemporary and sometime colleague Steve Reich. ‘What I find extremely inspiring is the use of technology in their earlier works. They aren’t necessarily using new technology but they’re very much inspired by new technologies – synthesisers and recording devices and tape machines – and how they use those experiments to inspire a very fresh sound which rejected the academic, European, complex way of working,’ says Dan. 'It's very much what I'm into - using new technologies, and being inspired by digital and VR and digital and 360 technologies, even the metaverse, to try and discover new forms and shapes, and new forms of music.'

This is, of course, what Refractions as a whole is all about. You can draw a clear line between the early work of Philip Glass in the 1960s and 1970s and Dan’s use of immersive technologies today in 2022. There’s a shared innovation there, and a drive to keep composition fresh as a contemporary art form. ‘It’s certainly opened up his body of work in a new light for me,’ Dan says. ‘When you listen to music, unless you’re studying a composer at university you don’t generally sit down and chronologically go through their works in this way. It’s eye opening. With those early experiments, the way that he kind of infuses that with these big symphonic classical techniques that have been developed over hundreds of years is very clever.’

‘He’s ultimately turned himself into this incredible symphonic operatic composer, with original sounds that he's created from these very simple techniques. I think it’s incredible.’