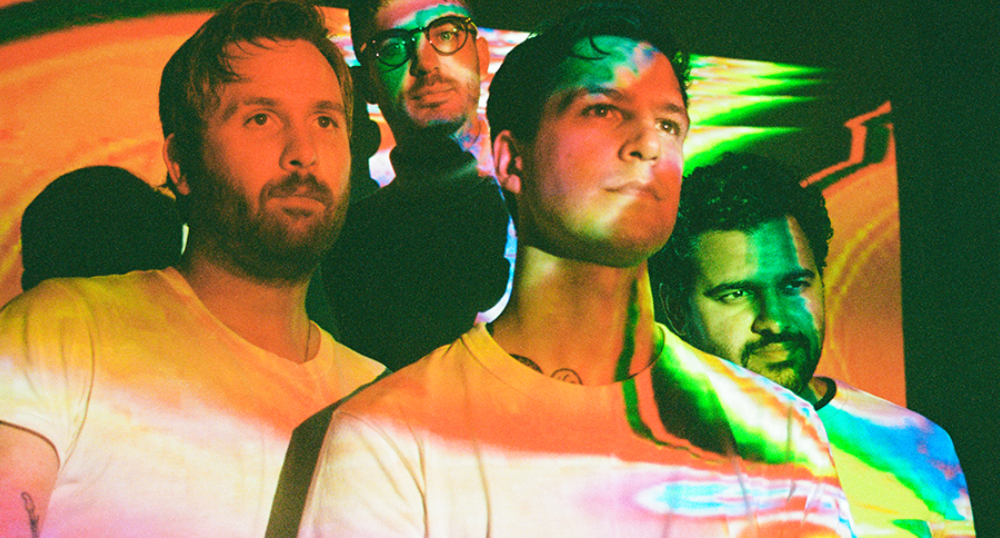 Crows: ‘Don’t believe everything you hear, especially from people who lie a lot'

The band that never give in to bad luck, Crows have returned with a killer album and are building an ever-growing army of true believers.

James Cox is sitting in a cramped broom cupboard while the world seems to be teetering on the very edges of World War III, the news broadcasts full of today’s Russian invasion in Ukraine. For a band that often seem to be cursed with the worst luck, it feels an entirely fitting time for Crows to be releasing their second album. ‘Are we the most cursed band in history?’ Grins James. ‘I’ve given up now! Something’s always gonna happen with us.’ Hoping that this time fate will be kinder to them, he shifts in his (very uncomfortable) seat to tell M Magazine all about Beware Believers.

Written in a flurry after they finished touring their debut, Silver Tongues, Beware Believers was born from those heady days when Brexit and nationalism were the main issues that the country had to contend with. Written in the summer of 2019, and then recorded in early 2020, the plan was for a quick release. Then you-know-what turned up and all plans went out the window. Fast forward two years, and though the world has all new problems to go with the old ones, the themes remain alarmingly, and depressingly, prescient. ‘The whole theme of the album is what was going on at the time,’ explains James. ‘Brexit was still at the forefront of the news, and there was always Trump and Nigel Farage spouting all this dog-whistle politics shit.’ The album title comes from that danger in believing everything you hear from the so-called leaders of the world. ‘There are those people who are such criticisers of fake news, but who love to spread fake news themselves,’ he says. ‘Don’t believe everything you hear, especially from people who lie a lot.’

‘There is a lot of foreboding and foreshadowing stuff that has happened in my life since we recorded it.'

Tracks like Garden Of England explore those dangers surrounding the nationalist wave. You don’t have to be a political expert to recognise some of the personalities behind lyrics like: ‘I can say what I please and be famous / I’ll continue to lie and continue to spread it as wisdom.’ Written two years ago, James hasn’t exactly seen any improvements since, especially as we talk on the day that all Covid rules are dropped in England. Barely able to bring himself to talk about his thoughts on the (current) Prime Minister, he spits, ‘I just think he plays the doofus role. I don’t even want to say his name, he’s like fucking Voldemort, but he’s incredibly annoyingly smart in a very sneaky conniving way to keep all is votes. He knows how to play the game, which is why he is in power!’ Returning to Farage, he continues. ‘He was just going on the fucking TV and lying, completely making stuff up and people weren’t fact-checking it. And then other people take it as gospel without thinking about it.’ He continues on this theme for a while before checking himself with a despairing, ‘Aargh! I’m so tired, man.’

Though they’ve always been politically aware and happy to talk politics in interviews, Beware Believers marks the first time that the London band have directly broached it in song. Closer Still is another barbed dart aimed at the Government and the Fit For Work policies. ‘People were just getting deemed Fit For Work because everything was being done through a computer,’ he says angrily, ‘which is problematic in itself because a huge amount of people that need support and money aren’t tech savvy at all, or have trouble using computers. Sometimes because they’re older and have never used a fucking computer before.’ James himself had to sign on and points out that even for him it was a confusing experience. ‘All these people who can’t actually figure it out are then penalised for that,’ he continues. ‘It’s like, ‘Well if you can’t figure it out then it’s your problem’. That just really irked me, so I actually wrote it because I was angry at something.’ For a lyricist that normally finds his inspiration in what he calls ‘the weird, freaky shit that I like,’ it made for a welcome change of pace.

The pandemic, and the effects of it, make no appearance on the record — James says that he’ll save that for the next record. And yet, there are plenty of references that point to a feeling of the singer taking some form of a breather and finding some respite from an unnamed source. ‘There is a lot of foreboding and foreshadowing stuff that has happened in my life since we recorded it,’ nods James, ‘which is weird! Sometimes it’s like, “Oh, I was thinking about this two years ago and now it’s happened,” which is a bit fucking weird.' Other influences came from surprising sources — Wild Eyed and Loathsome springs from a poem James’ father wrote and is here crafted into a track of fiery intensity. The results are startling throughout, the record making for a sharp shift onwards and upwards in sound without losing any of their primal, visceral power that got them this far. It laughs in the face of any reputation for bad luck that the band may have. Though, to be honest, they seem to have been tempting fate with some of their studio antics. Hide-and-seek with knives, anyone? ‘We’re fucking idiots,’ laughs James when I ask him about this dangerous upgrade to a wholesome family game. ‘Recording an album can be very boring, especially when Jith [Amarasinghe] is just doing the same bassline for hours. So we started playing hide and seek, but then we found all the hiding places.’ The blame for the escalation apparently falls at guitarist Steve Goddard’s feet. ‘He just grabbed a knife from the kitchen, and was hiding ready to pounce.’ Shrugging it off, James then tells the story of nearly having his eye taken out by Steve when they lived together as if it’s a perfectly normal experience. ‘We’re morons who get bored and like to do stupid shit,’ he grins.

‘Turning up to the venue, seeing the sound engineers and lighting techs with a smile of their face, that was a real nice moment for me.'

It’s hard not to be moved by seeing Crows enjoying the good times once again. One of the many bands to have had their entire equipment stolen in recent years, they also were one of those who suffered the most from the arrival of Covid-19 - having literally just paid for tickets and visas for SXSW out of their own pockets days before it arrived to snuff everything out, losing everything in the process. James remembers well the moment he heard that SXSW had cancelled. ‘I was DJing at the Shacklewell Arms, and we knew it was coming,’ he recalls. ‘Everyone was freaking out, and I saw the news come through literally as I about to start DJing. I remember being so pissed off — this was when we didn’t really know the extent of how bad it was. I got really drunk and I woke up with the worst hangover, both from the hangover itself and also remembering that SXSW was cancelled and everything was fucked up.’

One of the first bands to then play a full un-socially distanced show when restrictions were (temporarily) lifted in July 2021, it was a heady time for the group. ‘Turning up to the venue, seeing the sound engineers and lighting techs with a smile of their face,’ he smiles, ‘that was a real nice moment for me. Seeing everyone in the crowd going fucking mad, beaming genuine ear-to-ear smiles and properly letting go, that was very nice.’ He remembers how many young faces he saw in the crowd, pointing out that for many of them this could have been their first show. Many other highlights followed, including a memorable slot at Wide Awake Festival in Brockwell Park — leading to this year’s triumphant, and long-awaited, slot at SXSW. It’s hard not to think that the tides are turning for James and Crows. ‘We’re just gonna make the most of it,’ he agrees, ‘America is something we’ve wanted to do for our entire career. Everyone’s always said that they know that we’d do well in America. It feels good that we’re finally gonna be able to go and at least try. Fucking hell, we might fail and do a Robbie Williams. But at least we’re gonna shoot our shot, you know?’ Crows, the Robbie Williams of British punk? That is something you can believe in.