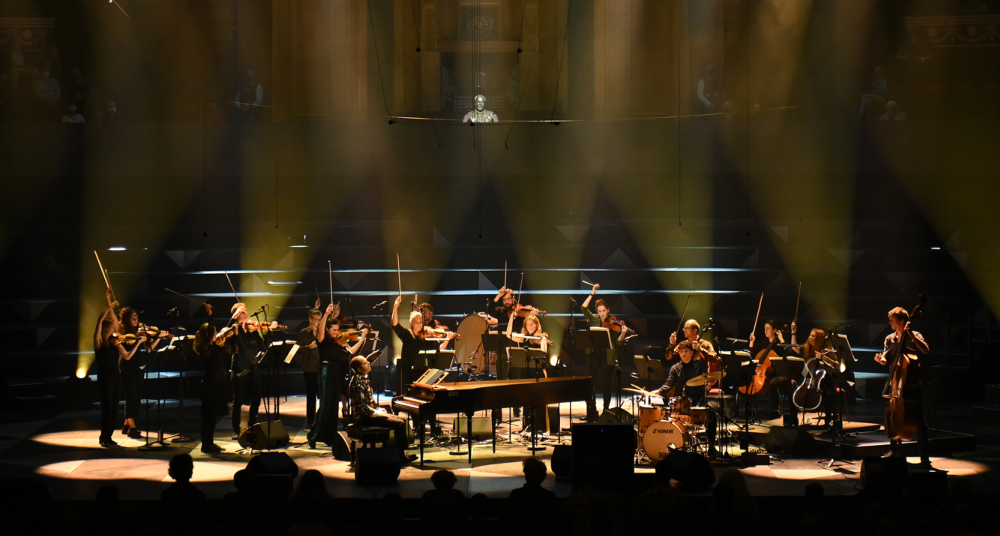 When I speak to Manchester Collective, they are still buzzing from last night’s performance; a warm-up gig in their home city for their much-anticipated Proms debut. ‘Everyone was quite giddy,’ says chief executive Adam Szabo, speaking of the Manchester show: ‘Just being in a live performance with an audience that wasn’t distanced for the first time was very exciting.’ Manchester Collective music director and violinist Rakhi Singh agrees: ‘It was amazing to look out and see a sold-out house,’ although, as many musicians have found, the return to pre-pandemic levels of activity has taken some getting used to. ‘After everything being cancelled, suddenly in April, we had radio broadcasts, projects in development and performances: it all hit at once. But we’re getting back into the pace of things now.’

And what a pace it is. A Proms slot is a huge milestone for any ensemble, but for Manchester Collective, a relative newcomer of a mere 5 years’ standing, it’s a huge vindication of Szabo and Singh’s bold, left-of-centre approach; something very much in evidence in their Royal Albert Hall programme.

Flanked by two radical harpischord works (Henryk Górecki’s thunderous Concerto Op.40 and Joseph Horowitz’s playful Jazz Concerto), are Edmund Finnis’s The Centre is Everywhere, Julius Eastman’s In the Holy Presence of Joan d’Arc, and Dobrinka Tabakova’s Suite in Old Style. If some (or possibly all) of those names are unknown to you, there’s a reason for this.
‘One way or another,’ says Adam, ‘many of the composers on this programme have not necessarily been given the recognition that their music would merit.’ The most poignant tale is that of minimalist composer Eastman; a Black, openly gay man who died homeless and forgotten, in spite of his Grammy nomination and his work recording for Peter Maxwell Davies. Adam is keen to emphasise that the main rationale for including such unheard works is artistic: ‘Far from any moral reason, at the most straightforward level, these stories are interesting to tell because they haven’t been told very much.’

‘Within a musical texture, you can experience a huge depth of feeling: things that sound somehow ‘close up’, and others that give the illusion of great distance.'

The other starting point – as with many MC projects – were the group’s living collaborators, both on and off stage. ‘When we spoke to the Proms, we were about to work with [harpsichordist] Mahan Esfahani, and our violist, Ruth Gibson, gets one of the best viola solos ever written in Dobrinka’s piece.’ They were also keen to perform The Centre is Everywhere by British composer, Edmund Finnis: a collaboration which began in 2019, with the commissioning of the piece, funded by PRS.

The Centre is written for 12 solo strings, and its enigmatic title – to which the Collective’s debut album also gives its name – is an adaptation of a quote from a Medieval theological text, entitled The Book of the 24 Philosophers. ‘The full sentence is: ‘God is an infinite sphere whose centre is everywhere and whose circumference is nowhere.’ There’s something wonderful about the ambiguity of that – and the impossibility of grasping that mental image. The more I write music, the more mysterious I find the whole process of composing, and the ritual of performance, to be.’

That sense of mystery and intangibility draws the listener into The Centre. From silence, a toneless sound, like white noise, emerges, over which different layers of melody begin to unfold and coalesce. The listener has an eerie sense of altered time: whether slowing down or speeding up, or both – and that unsettling duality, of playing with scale and perception, is something that fascinates the composer: ‘Within a musical texture, you can experience a huge depth of feeling: things that sound somehow ‘close up’, and others that give the illusion of great distance. It all comes from subtle changes in how the sound is made, and how layers are built up.’ It’s no surprise that Finnis draws inspiration from the visual arts in his music - citing Agnes Martin’s grid paintings and filmmaker Tacita Dean’s close-ups of Giotto’s frescos – and his next commission for Manchester Collective is a song-cycle of poems by British writer, Alice Oswald, premiering in 2022.

'We’re only playing instruments and it’s not life or death, but in some ways you’ve got to play like it’s life or death.’

I observe to Adam and Rakhi that their list of forthcoming show titles reads like a post-modern poem in itself – Neon. Heavy Metal. This Savage Parade – and that the way the ensemble’s website advertises their concerts is more reminiscent of Nigel Slater’s food writing than the dry, historical copy that one associates with some concerts. ‘If you’re speaking to a concert-going audience,’ says Adam, ‘you don’t need to tell them how good Beethoven is because they already know. If you’re talking to someone who doesn’t know about Beethoven, then it’s pointless going into biographical detail because they don’t know who you’re talking about is anyway. We’re just trying to bring this stuff to life. And if Nigel Slater wrote about food the way we write about music most of the time, it would read like a Britannica entry on sea buckthorn! I think that’s what food writers do really well. And in theatre, of course, they understand that this is about telling stories.’

Stories and imagery are key to Rakhi’s approach to music-making, too: ‘I was talking about the Finnis in rehearsal the other day, and I was trying to describe how the slow-moving lower parts need to give a feeling of strength to the piece, when it suddenly popped into my head: they’re the blue whale in the sea, and the other parts are the waves on top. Immediately, you’ve got something you can relate to. If you can conjure up images and appeal to all the senses, it’s a much quicker way to get to people’s imagination.’

In general, Rakhi says, the goal of every Manchester Collective performance is to create a satisfying emotional journey for audiences. ‘In our programming, we might start with a particular piece with a really strong impact, and then we build something around that to create balance. Sometimes, you can bring out new flavours by juxtaposing different styles or finding a link to Bach within something contemporary. It’s a whole tasting menu.’

This kind of careful thought is key, but it’s not everything: ‘It’s about a commitment to excellence, too,’ she continues. ‘If we had all this fantastic programming and marketing but our performances were flat and not engaging, then we’d be a bit of a fake band. But the fact that [the players] come along and they’re ready to give of themselves is what holds everything up. We’re only playing instruments and it’s not life or death, but in some ways you’ve got to play like it’s life or death.’

'...it’s only when we’re a little bit uncomfortable that we grow. And if you’re not evolving, you’re not creating.’

Adam maintains that the group’s part-time schedule and flexible structure fosters a freshness of approach which benefits not only them but the wider music scene as a whole: ‘The players have time to go off, have a bunch of other exciting experiences and they bring that back to us – and vice versa.’ As a case in point, Rakhi has just finished recording her own EP for Greenland-based label Bedroom Community; a mixture of her own compositions and other new works.

The Collective doesn’t shy away from canonical works, either: ‘We did Schubert’s Death and the Maiden with Crumb’s Black Angels. And,’ she adds, grinning, ‘I think Adam has a secret hope that we’ll play Beethoven 5.’ ‘We love classical repertoire,’ he insists; ‘It’s just that when you’re trying to create experiences that feel really vital, it helps if you’re going to work with people who are alive!’

It’s anyone’s guess what future years will hold for the Collective, but one thing is certain: they will strive to continue to grow, with new surprises – and non-dead collaborators – at every turn. ‘As creatures we err towards the comfortable,’ muses Rakhi, ‘but it’s only when we’re a little bit uncomfortable that we grow. And if you’re not evolving, you’re not creating.’

The Holy Presence, the Manchester Collective Prom, is available to hear for one month from 17 August on Radio 3 on the BBC Sounds App and will be broadcast again on 3 September.