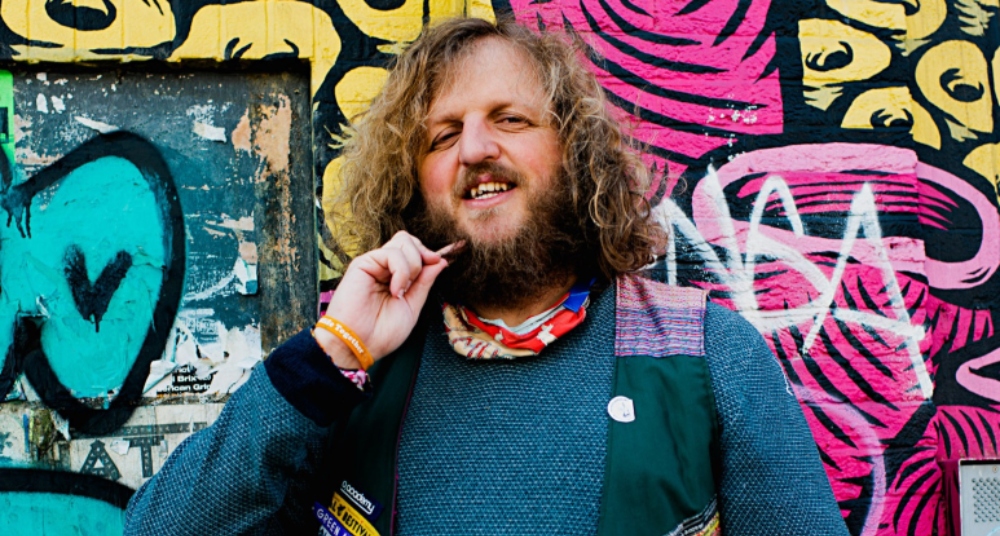 Jamie : Thanks for making time to chat, Jeff. We were looking at the return of live music this year and thought that you might just be the person to chat to.

Jeff : You’d be hard-pressed to find people who go to more shows than me.

Jamie : How many do you think you’ve gone to this year?

Jeff : I’m terrible at keeping count. There’s been only a couple of nights where I’ve had to take the night off because of having to take a PCR test or when I had the exhibition. I had to isolate the couple of days before that just to make sure, but even during the exhibition I was thinking it was ten yards away from two very good gig venues. Technically it’s on my way home.

Jamie : How did you feel when shows first came back?

Jeff : I still get a bit anxious about being in crowds but usually by the time the music has started I’m a bit more relaxed. Going back to the bigger venues in Bristol, it took me a little while to feel safe. I feel that all the venues have been very responsible.  My first non-socially distanced gig back was Dogeyed and Toodles & The Hectic Pity at the Exchange. Everyone was masked-up and keeping space from each other — all a little nervous. It was really lovely to go back to a place like that and see the community. It was also good to see that I wasn’t the only one who was feeling a bit hesitant.

Jamie : Having been to Bristol a few times, I ‘d magine that you see the same people at a lot of the gigs…

Jeff : It’s lovely to be in these venues again, especially places like The Exchange or The Louisiana. They are more than just a room with a stage, they are my safe spaces. There are people there that are like family. Some of the venues have gone so far and above what was expected of them — places like the Trinity are almost like a community centre. It was how they had to adapt to survive. The Louisiana turned into a pizzeria and going to some of their socially distanced gigs, I’d be watching bands whilst eating dinner.

Jamie : Having a pizza at every gig would be fatal for my waistline.

Jeff : I didn’t do it at every show — I’d also be looking at the dent in my income. But to be honest, I’ve found myself going to the merch desk at every gig and buying stuff, mainly to support the artists. I reckon since coming back to shows, I’ve probably spent at least a couple of grand on merchandise especially if someone’s brought out something that’s a novelty. Recently, I went to see Self Esteem at The Fleece and bought one of her pillowcases. I didn’t necessarily have any pillows to put in it, but I still got the pillowcase.

Jamie : Do you remember your first ever gig?

Jeff : Oh God, this is really cringe-worthy. There was a boyband all-dayer in Newport in 1994. East 17 headlined with Michelle Gayle, Pato Banton, Craig McLachlan, Ultimate Kaos with a K and Deuce. Also Backstreet Boys and Peter Andre before anyone knew who the hell they were!

Jamie : I don’t know what I was expecting, but it wasn’t Pato Banton. How was it?

Jeff : Great! I mean, I was 11. I’ve always had a bit of a soft spot for pop music. I primarily went because East 17 were famous. But then my second proper show was something which shook me. I accidentally ended up watching Skunk Anansie just before they released their first album. Being 12 years old and seeing this Black skin-headed gay singer singing songs about racism and religion was really powerful.

Jamie : When did it become a really big part of your life?

Jeff : I guess since my teenage years. Occasionally I’d be trying to twist my parents’ arm, telling them there was something I want to go to. I grew up 40 miles north of Bristol and there was virtually no public transport. If I wanted to go to gigs in Bristol or Gloucester, I would have to sweet talk my parents into picking me up. If there was a show I really wanted to go to they’d buy me a ticket, but I’d often have to do chores to earn the money. They were like, ‘If you wanna go and see this here’s a load of logs you’ve got to chop,’ especially if I was going to go and see someone classic like Black Sabbath or Aerosmith. I think I earned about three pounds an hour. That’s how I got records and CDs as well. I would spend ages in a record shop fixated until I’d get to the point where my parents would just leave me. I’d still be there two or three hours later.

Jamie : What was it like for you when the first lockdown hit?

Jeff : Obviously, we all have ups and downs with lockdowns. I was quite busy then so I don’t think I had the worst of times, but I was really worried for the venues and potentially losing places like The Louisana or Crofters Rights — spaces which really meant a lot to me. I was so glad I could be positively involved in some of the campaigns to save them.

Jamie : You called The Louisiana your safe space. Can you tell me a little bit more about that?

Jeff : When I saw it originally, I was like, ‘Wow, look at all these cool bands coming through here.’ I would turn up frequently, but I wouldn’t talk to anybody. I wasn’t always as emotionally open as I am now — I was very shut up and was going through a bit of a difficult time. I was very different. I would quite often go in there — whether I had a ticket or not — and would just stare at the posters on the walls. If anyone asked if I was alright, I would say ‘Yeah,’ and go back to staring at the posters. But often when I would go there it would be the same person on the door, so having that same person there meant that the familiarity gradually chipped away at me and it made me open up. I think it was about that moment of building trust and then it was like I became a part of their family.

Jamie : That’s why those places are so important isn’t it? I’m sure plenty of others would have felt the same thing…

Jeff : Quite often it’s the artists as well. I found myself watching the bands, and if I enjoyed the gig I’d go up and say thank you to the performer. Sometimes I swear I’d confuse and bewilder people because they could be 15-year-old kids, and I’d give them a long list of who they sounded like. Having smaller venues means that people can build relationships through the music. There’s been some shows like Fleet Foxes and Beach House at the Louisiana where it’s so beautiful, you almost feel everyone crying in sync. Or going to see Scissor Sisters where everyone was doing disco routines.

Jamie : I miss the Scissor Sisters.

Jeff : Especially on the first record, they were great. They really were a phenomenal live band, that record is full of so many pop bangers.

Jamie : What’s next for you then?

Jeff : I definitely hope more of the art, especially considering the reaction to Welcome To My World the other week. I think I’d really like to take that exhibition on tour round different cities. And I want to do stuff where if we do that then I want to work with different organisations. We worked with Off the Record, which is a great Bristol-based youth mental health charity. We worked with Talk Club and had Running Punks involved as well. But to be honest, we’re just seeing what next year has in store for us.

Jamie : Lastly, is there anybody left that you still want to see live but you haven’t?

Jeff : Oh yeah, it’s gonna sound random, but someone like Chaka Khan. Ain’t Nobody is an absolute banger. She’s responsible for some of the greatest disco of the 1970s. There are definitely a few people like some of the newer artists like Ganza — an American noise post-punk outfit. Also South Korean artists — like Leenalchi — who I’d really love to see.