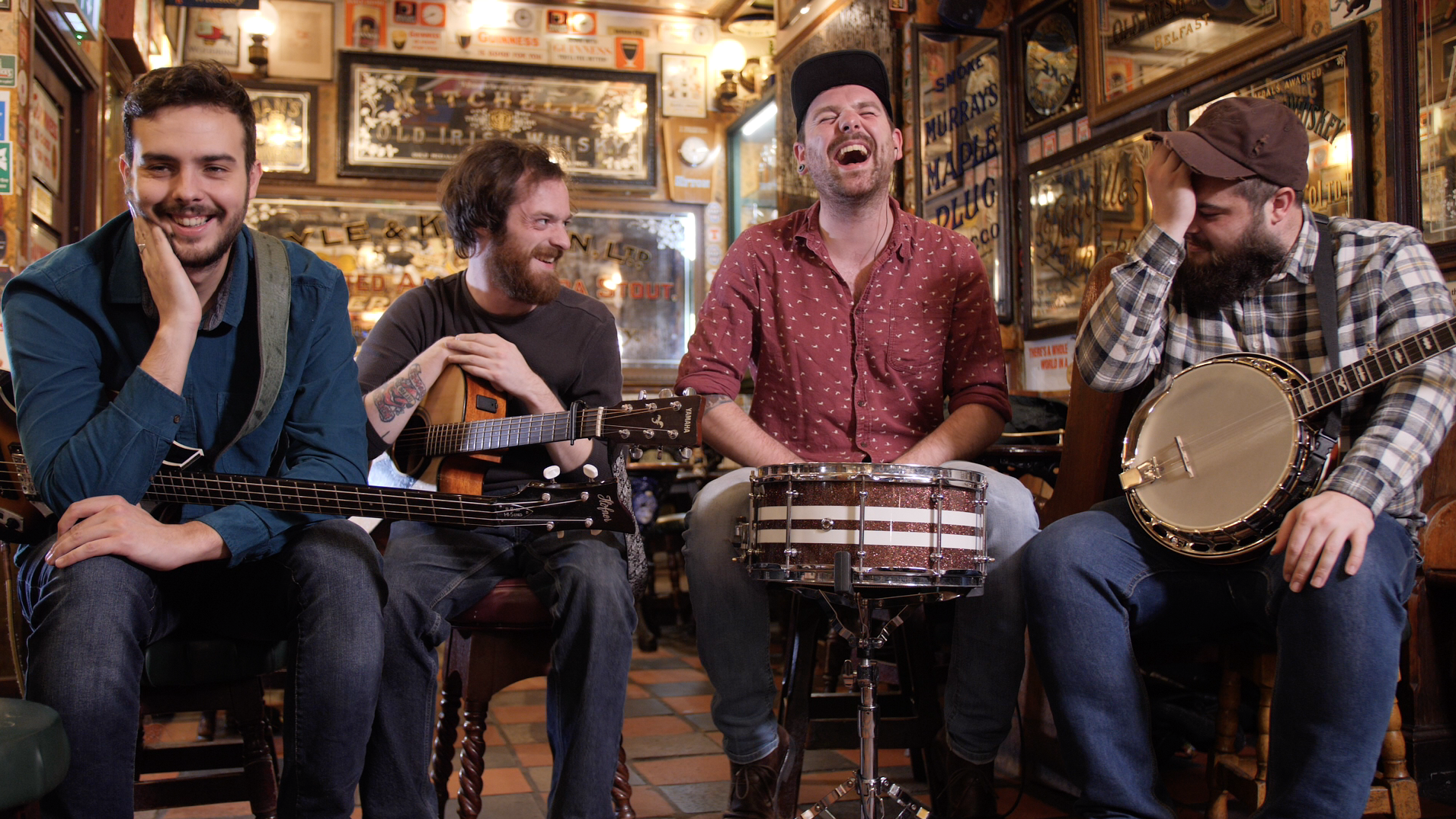 How does a city define its culture? Or does culture emerge organically, growing out of whatever nooks and crannies it can find, squeezing whatever shape it is able to fit into? Whatever the answer to this question, it’s undeniable that the COVID-19 pandemic has shrunk — in some cases destroyed, the spaces culture can fit into. With venues under pressure and gigs running at reduced capacity, even the simple, communal act of singing in a room together is now fraught with anxiety. Can culture grow back bigger, by itself, or does the soil need fertilising?

'We have a real opportunity to create a model that delivers for Belfast, not to focus on what other cities have done, or failed to do.'

For an answer to this question, it might be wise to observe Belfast in the coming years — as well as study its recent history. This year it became the third UK city to be awarded UNESCO City of Music status, following on from Glasgow in 2008, and Liverpool in 2015. ‘Music is embedded in the daily lives of the city’s people,’ read the pitch document, ‘and is, right now, being harnessed to create a shared vision for the city.’ While discussions had been ongoing about an application prior to the pandemic, the suddenness and severity with which it hit was something of a catalyst in pulling the bid together, as the team began to imagine how music could play a part in any recovery — both from a creative and economic standpoint. And though these three cities are now joined under one umbrella, so to speak, speaking to Belfast’s Creative Tourism Manager Erika Clark, and Lynne Best of The Fourth Pillar, who both of whom worked closely on the bid, it’s key that Belfast shape the award to fit them, not the other way around. ‘For this title to be meaningful, it has to have a local focus,’ they say, ‘we have a real opportunity to create a model that delivers for Belfast, not to focus on what other cities have done, or failed to do.’

One person who was instrumental in Belfast receiving the award was Charlotte Dryden, chief executive for the Oh Yeah Music Centre. She tells me that as the pandemic hit, the question of whether to make the bid at all was prominent in the minds of the steering committee. ‘We all had to sort of seriously discuss “do we want to make the application for 2021, or do we hold off?” but the group felt that we needed to do this. It was a nice boost just a month ago when the announcement was made. We can try now to repair and rebuild.’

Not only was Charlotte heavily involved in the bid, but the Oh Yeah Music Centre itself is evidence enough of the importance Belfast affords its music scene. Founded in 2007 by broadcaster Stuart Bailie, Snow Patrol’s Gary Lightbody, and with help from several other Belfast musicians, what began as a lightbulb idea over some pints of Guinness one Christmas has expanded its remit from simply a musical hub, to include a venue, recording studio and cultural centre, as well as a place for talent development and career opportunities, both for artists and those wanting to get into other areas of the music industry. ‘Talent development is such a huge part of what we do. We’ve become really well connected with the wider music industry across the UK and Ireland, and the centre itself has become a place where the wider industry will look to when they want to know what’s happening in Northern Irish music.’

One person who’s benefitted from Oh Yeah’s talent development programmes is singer-songwriter Sasha Samara, a recent winner of the New Contender Award at the Northern Ireland Music Prize, another tent pole event the Oh Yeah Music Centre has its fingerprints over. In 2019, when Sasha only had, in her words, ‘a few songs under her belt,’ she was accepted onto a PRS funded programme to help nurture her fledgling career, and while this programme was cut short because of the pandemic, they have remained closely involved with her. ‘I wouldn’t be where I am without them,’ she tells me. ‘They’re constantly supporting grassroots, small, diverse operations in the city. The music scene thrives because of the work they do.’

'You probably won’t find that young people are really writing and talking about The Troubles, but they’re certainly trying to address the issues that we’re faced with today.’

When considering the history of music in Northern Ireland, it’s impossible to ignore the political history of the country too. Stiff Little Fingers’ ‘70s punk rock anthem Alternative Ulster begins: ‘There’s nothin’ for us in Belfast!’, but in the music to have emerged from the country in the immediate aftermath of the Good Friday Agreement, that politicisation was less present. ‘Bands didn’t want to write about the Troubles,’ Charlotte says, ‘We just want to write about normal everyday life and loss and whatever else, and that’s what bands did.’ In a sense, that’s also what bands like Stiff Little Fingers were doing, it’s just that their everyday life was in the middle of a civil war, but despite this new generation having grown up only knowing peace in Northern Ireland, Charlotte has seen a politicisation creeping back into the songs emerging from upcoming talent: ‘There’s more activism now than ever before. LGBTQ+, diversity, racism — that’s all being addressed in music again. Art can be that catalyst for those things. You probably won’t find that young people are really writing and talking about The Troubles, but they’re certainly trying to address the issues that we’re faced with today.’

The idea of a country’s ‘cultural economy’ has become something of a buzzword in recent years, particularly in the UK where the arts constantly have to try and make a case for themselves as something that can hold its own economically. Many have noted the explosion of South Korean culture in recent years, with cultural exports like BTS, Bong Joon-Ho and Squid Game crossing over into Western, mainstream culture and around the world, but what’s interesting is the roots of that success can be traced back to a political decision — and one guided by an economic choice — when a presidential advisory board in the 1990s noted that Jurassic Park earned the equivalent of selling 1.5 million Hyundai cars. Because culture is ephemeral, and intangible, sometimes it’s hard to imagine its value in pounds and pence. But it’s there, and in considering that it’s worth remembering that the music industry isn’t just artists, and this wider industry seems to be thriving in Belfast too. As Sasha tells me, ‘It’s such a wildly diverse scene, people are just so hungry for music. There’s so many independent promoters and young managers who are really passionate about championing music in this city.’

'Music is too important to have to fight for its seat at the table — that’s something the people of Belfast seem to have recognised a long time ago.'

The UNESCO City of Music award is already a vindication of the work being done in Belfast, and just how interwoven music is with daily life in the city, but it feels more a starting gun than a chequered flag. There is a desire to reach over 1500 musicians and music businesses annually, reach 15000 people total, and develop the city’s vacant and public spaces for cultural use in collaboration with the city’s other creative sectors. ‘We want Belfast’s citizens to experience the city as an orchestra, with access to permanent and temporary pop-up instruments and the coming together of the unusual, traditional and popular with collaborations and performances from pipers and drummers with the likes of indie and electronic artists,’ Erika and Lynne say.

Some particularly exciting and forward-thinking outcomes of the award are a Global Music Convention on Sustainability, hosted in Belfast, looking at the role the music industry can play in tackling the climate emergency, and on a smaller scale the introduction of a Gig Buddies scheme to attempt to increase access to music events for those with learning disabilities and on the autism spectrum. It’s not just about supporting artists. It’s looking at the bigger picture.

All of this fertilises the soil. It’s sometimes more romantic to think about music scenes as these things that grow in spite of infrastructure. As elements of the counterculture that get absorbed into the mainstream by sheer force of will. But music is too important to have to fight for its seat at the table — that’s something the people of Belfast seem to have recognised a long time ago. Whatever the recovery from the pandemic is going to look like, things are growing in Belfast, and things will grow out of this award.