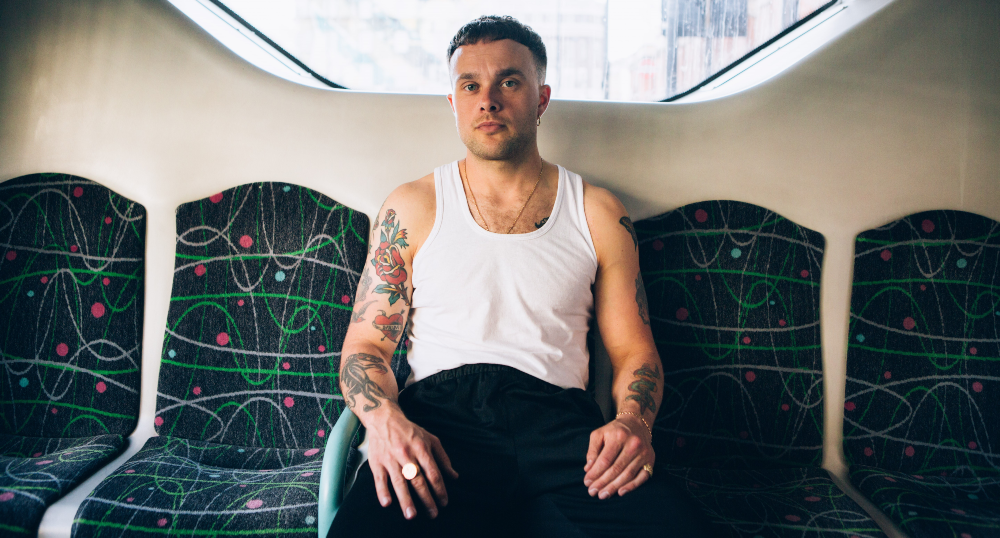 Gardening, Garage Band and gigs: we talk to Isaac Holman, aka Baby Dave, about writing solo and his debut album, Monkey Brain.

It’s no secret that music and gardening are some of life’s greatest tonics, and this can certainly be said of the past two years. For Isaac Holman, aka Baby Dave, it’s no different. But, as previously one half of Slaves, the time to write on his own and clear his head outside has resulted in a debut album produced by Damon Albarn. Not everyone can say that.

Monkey Brain kicks off with the aptly titled intro I Love Gardening and Isaac tells me that without gardening, Monkey Brain might not exist: 'Gardening was a big part of this whole project, so I wanted to pay my respects,' he tells me. Isaac isn't shy to talk about his the difficulties he’s had with his mental health, with both the record and our conversation reflecting this. Indeed, ‘monkey brain’ is a term he resonated with in therapy. Isaac is quick to share that the album is very honest about his feelings. 'Its raw, it’s DIY, it’s all very real,' he says, adding, 'It became a conscious decision to be really straight up about everything.' While the intro starts off sweet, hearing from a collection of Baby Dave’s Instagram followers detailing why they love gardening — he put a call up on his stories when they couldn’t clear the copyright for a clip of Monty Don — it soon descends into a scene of multi-layered chaos. 'I wanted to make it horrible to listen to, to represent my intrusive thoughts at the time,' Isaac explains. The opening track does exactly what it should, introducing us to the medley of pandemonium and gentle storytelling that Monkey Brain is built upon.

It's evident that everyday life is a muse for Isaac. 'I love writing about normal things and mundane shit,' he explains. Laughing, he continues, 'My notes folder on my phone is bonkers, it’s just the ramblings of a mad man. I’ve always got an ear open.' Tracks like Beautiful Princess (about a 'terrible waitress') are, unsurprisingly, the product of this. Isaac tells me that his friend Lucy, who also appears in 29, like many of his mates, is very easy to write about. There’s an authenticity to the music Baby Dave writes which permeates his music videos, so when he tells me they all include the people they’re about, my suspicions are confirmed. 'I want everyone who’s in the tune to be in the video,' Isaac says, highlighting that Gen Z Baby is about his girlfriend and Clarence’s Dead Dad was borne out of a story his friend Kelly told him. He explains that as part of Slaves, all he cared about was performing but now, working solo, he’s really enjoying the ‘making’. 'I think it’s because I’m doing it myself so it’s more rewarding,' he tells me.

Isaac might be in a relationship now, but there’s an undeniable thread running through the record — specifically with tracks like Too Shy for Tennis and Stupid Mouth — pointing towards social anxiety and the minefield of dating. 'A lot of the time I just can’t deal with people, so it made sense for it to be a bit of a theme,' Isaac explains, sharing that Too Shy for Tennis was written off the back of talking to a girl again after leading a solitary life for quite some time. 'We’re great friends now but when we first met, she asked if I wanted to play tennis and it scared the shit out of me,' he laughs.

The everyday, DIY feel of the album makes more and more sense as we talk, because it’s not contrived, that’s exactly how it was written. Isaac records his vocals at home — often in bed — using the mic on his earphones. So, how does Damon Albarn fit into all of this?  Isaac sent over what he thought were demos and they had a day in the studio. I can hear the shock, still, in his voice when he says, 'I was expecting to rerecord everything, but he thought they were good enough as they were.' It’s clear that without the confidence working with Damon provided, the whole project would have been different — easily ending up overproduced and losing the essence of what Monkey Brain is. 'Now, I just want to do everything on Garage Band and record it all super rough on my laptop,' Isaac says, explaining that it’s become a bit of a mission for Baby Dave to show people that you don’t need fancy equipment: 'I’ve had loads of money chucked into stuff in the past and it doesn’t make it sound any better,' he explains.

I’m interested to hear how Baby Dave envisions his me-myself-and-I approach to writing songs — laptop in tow — to live shows. He tells me that whilst playing with a live band is a very different beast, and something he’s still figuring out. He loves how it works with his Garage-Band-wonky-pop sound. Describing his dream performance, Isaac tells me that eventually he wants tens of musicians up on stage with him, a choir of children singing Washing Machine. 'Everyone dressed up in weird shit,' and the line between the stage and crowd utterly blurred and inclusive. 'I’m such a control freak with the recording but with the live show I want chaos,' he says. 'I always loved that about the Slaves shows — they were always on the cusp of going wrong. My favourite shows are the ones which could fall apart at any moment. It’s the uncertainty, that’s what I love about performing live.'

Has Isaac felt pressure bringing Baby Dave to the fore with Slaves having done so well? Not really, he says. 'Monkey Brain is different gravy. People might not ‘get it’. If they do, that’s great. If they don’t, that’s fine,' he says, whilst noting that having a pre-existing fanbase has made it easier because people are immediately interested.

Baby Dave has definitely found freedom with this record, whether it’s been messing around on Garage Band, telling anecdotal stories or being frank about his mental state, it’s clear that making Monkey Brain has been cathartic. I wonder where that leaves him, now it’s finished: 'I wasn't ready for it to be done,' he begins. 'I’d stressed out about this album so much and then when it was finished, I was like, "What am I going to worry about now?”'

What’s around the corner then? 'I might just make another album,' Isaac shrugs, smiling, telling me that he’s already got half a record’s worth of tunes from when he did acoustic sets, before Baby Dave. 'I’ll just crack on with that.' He’s also got some live shows lined up this summer, including 2000trees, which he’s headlined in the past with Slaves, and enjoys that he’s now starting again at the bottom of the bill. Next summer will be the big one for live shows, he says, when he understands better how the album translates on stage.

I’m curious to know if he’s apprehensive about balancing the catharsis of making music with the madness that promoting an album can entail. Again, it’s green fingers that hold the answer. 'I want to balance the music and the gardening,' Isaac tells me, emphasising that the calm of working outside would be a good way to balance the madness of the music industry between tours.

We can’t wait for the next album, or the day Baby Dave appears on Gardener’s World.

Monkey Brain is out now.