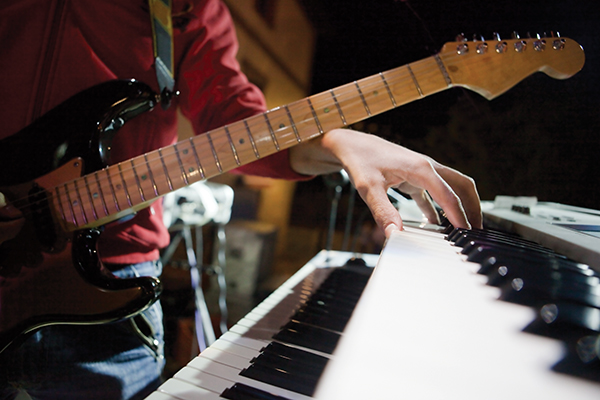 Check out our guide to avoiding or addressing songwriting disputes.

Robin Thicke and Pharrell Williams’ smash hit Blurred Lines hit the headlines for all the wrong reasons in 2013 after Marvin Gaye’s estate claimed the track copied parts of the late soul singer’s seventies song Got To Give It Up. The high-profile trial ended in March this year, and, in what was seen by many as a surprise ruling, the Gaye family walked away with the promise that they’d receive $7.3m (£4.74m) for copyright infringement. It’s not the first time songwriters have been sued for alleged plagiarism (there are documented cases of music copyright infringement dating back to 1845), and nor will it be the last, but the Blurred Lines example seems to have set a new definition for what can be considered copyright in musical works.

The decision, made by an independent jury, ruled that Robin and Pharrell copied elements from Got To Give It Up, even though the notes, chords and lyrics were not identical. ‘I feel Blurred Lines has blurred the lines as to what is deemed as copyright and not,’ says Liv Lyons, Copyright Lawyer at Clintons. ‘It has now been broadened to such a degree that it’s not just covering motifs or lyrics, it’s covering a feel. Essentially, if you have enough things in that mix; beats, a sound, you’re using certain instruments and maybe the rhythm is the same, that’s enough [to make a case].’

Other names to have been accused of taking a little more than inspiration from others include John Lennon, who was sued by Chuck Berry’s publishing company in 1973 and Michael Bolton, who was ordered to pay the Isley Brothers $5.4m in 1991 after a jury found his Love Is A Wonderful Thing lifted from their song of the same name. Elsewhere, Oasis have been sued by The New Seekers, Avril Lavigne by The Rubinoos, Coldplay by Joe Satriani and The Verve by two ex-Rolling Stones managers.

In January, it emerged that Sam Smith and Jimmy Napes had been involved in negotiations surrounding their 2014 hit Stay With Me, the chorus of which Jeff Lynne and Tom Petty said had accidental melodic similarities to their 1989 track I Won’t Back Down. The two parties came to an amicable agreement and Jeff and Tom are now credited for the track and have been paid backdated royalties of 12.5 percent.

It’s clear from all these examples that the line between influence and infringement can easily become hazy. So, when you’re in the heat of the songwriting moment, how do you know if you’re on the right side of inspiration?

There are two tests to check for copyright infringement in musical works, according to UK law. A ‘substantiality’ test judges whether a substantial part of the work is being copied, and there’s no specific threshold in terms of amount of notes or seconds of the offending excerpt. ‘That test is not about quantity, but quality,’ Liv explains. ‘So it doesn’t have to be the whole song that’s being copied, it’s just that what has been copied is the “heart” of the original, enough so that it’s undeniably similar.’

The second test is based on the presumption of copying, which, if two works are similar, determines if the defendant had access to the claimant’s works - which isn’t usually a problem in the digital age where everything is accessible via the click of a mouse. Liv continues: ‘Ultimately, similarity is the question that everyone comes to. There’s an argument to be had over what is sufficiently similar - it used to be limited to a motif, melody or lyric, but now it’s been extended to the feel and general sound of the tracks in question.’

It’s no secret that modern music of all genres is a blend of old and new influences, ideas, melodies and rhythms. Often, it can include samples of original works or feature lyrics lifted from other songs. Hip-hop is famed for its culture of reworking old songs while reggae, drum ‘n’ bass and folk are genres where the shell of the music stays largely unchanged from track to track. But regardless of genre, if a track is commercially successful, it’s likely to garner interest from other parties looking for their slice of the pie. So, in the wake of recent copyright infringements such as Stay With Me and Blurred Lines, what can songwriters and composers do to ensure they don’t find themselves accused of copying?

The outcome of the Blurred Lines case (unless it’s changed on appeal) can now be used as a precedent to decide future rulings for copyright infringement disputes in the US (and, to some degree, in other countries including the UK), so songwriters and composers should be more wary than ever before, says Liv. But that’s not as easy as it sounds.

It’s widely known that a common way of finding inspiration for compositions is to draw on what has gone before, and musicologist Joe Bennett observes that songwriters can be caught out by cryptomnesia. This psychological phenomenon occurs when a forgotten memory returns without it being recognised as such by the subject, who believes it is something new and original. The secret is to catch anything that might be considered inadvertent copying before it leaves the studio, says Joe, ‘and then adapt, adapt and adapt until it’s not recognisable’.

It can seem like a legal minefield out there for music-makers – many of whom worry that their creativity has been handicapped by the Blurred Lines ruling – but you can apply some simple sense checks that may help avert any awkwardness further down the line.

‘Don’t copy melody and don’t copy lyrics,’ says Joe. ‘There is nothing wrong in using someone else’s melody or lyric as inspiration for what you’re doing and then continually adapting it through your own creative process until what you have at the end of that process is an entirely new creative work, that is unrecognisable as being derived from the original.’

Samples – excerpts from other tracks which you use in a new piece of music - must be cleared by each of the master recording and songwriter/composer rightsholders well before the new track is released. There can be a lot of expense in doing that, as the owner of the sample can ask exactly how much they want for it, so the bigger the artist, the higher the fee is likely to be. However, it’s bound to be cheaper (and far less hassle) than an expensive lawsuit later down the line.

After you’ve gained permission, you can register your new piece of music, plus the samples you’ve used, with PRS for Music. You need to include all the details of the sampled work, including the royalty splits you’ve already decided with the original sample owners.

An arrangement is the re-configuration of a piece of music that alters aspects including harmony, rhythm and instrumentation. As an arranger, you should always check the copyright status and the source of your arrangements. Once you’re sure you’re not infringing any copyrights, you can register your new work with PRS for Music. Where there are other copyright holders, you should gain permission for your arrangement and agreeing royalty splits in advance.

When doing a cover of a song, you’re the sound recording owner of that version and will only need an MCPS licence for any physical products you want to produce. These mechanical licences are affordable and enable artists to replicate a song without fear of being sued by the original composer.

But, if in creating your cover version, you’ve in any way rearranged or adapted the original, you’ll need to seek permission from the music publisher or, if unpublished, the songwriter or composer involved.

Each year, PRS for Music and MCPS manage around 24,000 counterclaims, which arise when a number of members register a claim in the same work and the amount they each claim for exceeds a combined 100 percent. Counterclaims are more likely to occur when there are many writers, a lack of clarity on shares, or confusion over ownership. Of those 24,000 affected works, around 15 percent end up in a dispute status, says PRS for Music’s Senior Copyright Policy Manager, James Way. Members are alerted when works they have a claim in have entered into a counterclaim, and are guided through various steps via an online system and asked to provide supporting documentation where required.

If that process doesn't resolve the counterclaim, it’s then up to the writers and publishers to resolve the dispute - whether that be by getting lawyers involved, using a mediation service (a cheaper alternative where a third party is appointed by both sides to encourage and assist in a resolution) or amicably sorting out terms between themselves (the cheapest alternative!). PRS for Music isn’t the judge and jury over who legally owns a share in a musical work, but holds the relevant royalties in suspense until the dispute has been resolved.

James’ advice to members when registering works is to source permission if using any element of somebody else’s work, whether that be a sample or making something sound similar, and make sure that the share splits are agreed upfront in any works written. Getting all of this confirmed in some form of writing is also a good idea.

‘That doesn’t guarantee that it won’t become a dispute, but it should help people because the more things that are agreed upfront, the better it is,’ James explains. ‘Always remember that when you are using a piece of music that belongs to someone else, you need permission to do that.’