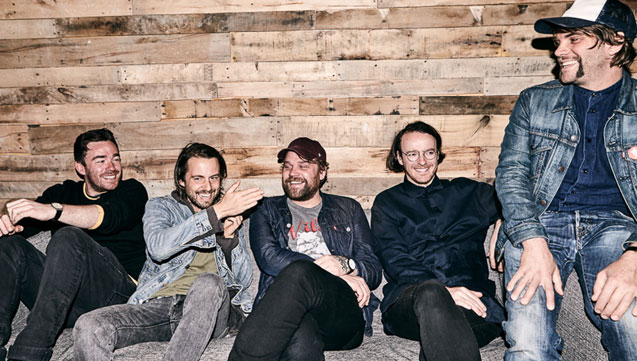 The Scottish musician founded the band back in 2006 with his drummer brother Grant. They went on to release five critically acclaimed albums, the last being 2016’s Painting of a Panic Attack for Atlantic Records.

Just last month, the brothers released a lauded album, Dance Music, under the Mastersystem moniker with Justin Lockey of The Editors. Hutchison, a prolific songwriter, also made a solo album under the name Owl John.

Over the years, he had been open about his ongoing battle with depression. Before he disappeared last week, he tweeted: 'Be so good to everyone you love. It's not a given. I'm so annoyed that it's not. I didn't live by that standard and it kills me. Please, hug your loved ones.'

Shortly afterwards, he added: 'I'm away now. Thanks.’

In a statement released on Friday, his family said he ‘wore his heart on his sleeve, and that was evident in the lyrics of his music and the content of many of his social media posts.

‘He was passionate, articulate and charismatic, as well as being one of the funniest and kindest people we knew. Friends and family would all agree that he had a brilliant sense of humour and was a great person to be around.’

They continued: ‘Depression is a horrendous illness that does not give you any alert or indication as to when it will take hold of you.

‘Scott battled bravely with his own issues for many years and we are immensely proud of him for being so open with his struggles.

‘His willingness to discuss these matters in the public domain undoubtedly raised awareness of mental health issues and gave others confidence and belief to discuss their own issues.’

Since the discovery of Hutchison’s body at Port Edgar, Edinburgh, on Thursday evening, tributes have been pouring in from the Scottish music community, with Belle and Sebastian’s Stuart Murdoch, Snow Patrol’s Gary Lightbody, Teenage Fanclub, DJ Edith Bowman and Alex Kapranos of Franz Ferdinand all paying their respects.

Stuart Fleming, PRS for Music senior manager, Scotland and Northern Ireland, said: 'All of us at PRS for Music are saddened by Scott Hutchison’s passing, and our thoughts are with his friends and family at this time. Scott was an incredibly talented songwriter who was very open about the struggles he faced with depression. There is no doubt that Scott has made a huge impact, not on just Scottish music, but on artists around the world.'

Hutchison was a supporter of Help Musicians Scotland. Last year, the central branch of the charity, Help Musicians UK, published a study which found that musicians are three times more likely to suffer from depression than the general public.

There are a number of charities and organisations specifically established to help songwriters, artists, musicians and those working across the music industry. Find out more about them here.