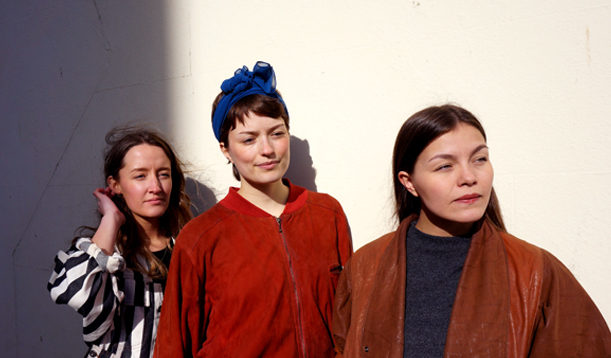 I See Rivers are a UK-based Nordic trio who deal in 'float folk' and mould-breaking vocal harmonies. Get to know them here before they hit the road on a UK tour...

Originally hailing from the Northern, Southern and Western parts of Norway, the UK based trio I SEE RIVERS move in a musical landscape that they’ve dubbed ‘float folk’.

Pulling together otherworldly melodies and untraditional vocal harmonies, they hit their stride at festivals throughout 2017, and are back on the road in UK and Norway this June and July.

We chatted to them before they set off to get the skinny on their sound...

Eline: Caught In The Middle by A1 was definitely a song I listened to way too many times as a kid. I entered a singing competition when I was around 9 years old and I was going to sing that song, but during sound check I got so scared that I pulled out and ended up not singing at all.

Gøril: I think I have to go for a song from a movie that I watched again and again as a child. My favourite movie was Dumbo, a lot because of the songs. Directly translated one of the songs was called Pink Elephant. That was my favourite!

Lill: I went to my first gig when I was 14 years old. My parents took me to Oslo to see Allison Krauss and Robert Plant on their Raising Sand album tour.

Eline: My brothers took me to see Muse play in Bergen in Norway when I was 14 years old. This was the first real gig I had ever gone to and it really blew my mind.

Gøril: When I grew up we didn’t have too many concerts in my hometown. Especially not for children. I went to a few concerts with local bands. Then the big happening in town came about: a concert with the Norwegian Idol artist called David Pedersen. We didn’t have any concert hall then, so it took place in the local school gymnasium. After that, when I became older, I went to see my favourite band at that time: Cyaneed - a punk band from Alta.

Lill: My dad used to be a musician when he was younger, so there was always a guitar around when I was growing up. Most of the guitars was off-limits to sticky children fingers though, so I didn’t actually start to play any instruments before I got a really horrible and cheap keyboard for my 12th birthday and even then, I didn’t learn how to play anything properly before I started Uni years later.

Eline: When I was six years old I joined a marching band in my home town, so the first instrument I learned to play was a baritone horn. Not long after I started playing violin, but I never quite connected with the instrument. I really wanted to play the piano and a neighbor of mine managed to find a really old and small keyboard hidden in her attic. This keyboard only had a few octaves, so I could only play very simple melodies on it. After playing that keyboard eagerly for a few weeks my mum bought me a Yamaha piano, that’s the same piano I write music with today.

Gøril: I started to play the recorder when I was about six. I walked around the neighbourhood playing the only song I knew: “Love me tender” until the neighbours one by one yelled out the window asking me to go home!

Lill: I don’t practice as much as I should. I also always sing in harmony when I sing along to songs, which I know is both ridiculous and annoying.

Eline: I’m a sucker for vocal harmonies and always end up filling up my recording sessions with lots of vocals.

Gøril: I will have to say not practicing my instrument as well. I do practice quite a lot, but I only know my own songs and the songs written in I SEE RIVERS. Which is quite uncool…

Lill: A really good friend (and co-producer) of ours, Toby Couling, thought me to look at any piece of musical work (both live and recorded) as a snapshot of where the musician is at the moment of performance. I think this is such a beautiful and pure way to look at any type of creative work as it, for me, removes a lot of the negative and destructive thoughts of not being good enough.

Eline: A teacher I had in University told me to always trust my own ears.

Gøril: To give space for thoughts from everyone in a team, try everything before thinking that it won’t work, and dare to play less (that it doesn’t always have to be packed of chords and instruments for it to sound big).

Lill: I’ve discovered a few artists by listening to a podcast by fellow Norwegian Einar Stray called Popkammeret (it’s in Norwegian though, sorry!), but except from that I find out about new music from my friends or just getting lost in Spotify.

Eline: I get most of my music from friends, but also from watching films and series.

Gøril: While shopping CD’s for the car or browsing the internet. And, of course, a whole lot from hearing about what my friends are listening to.

Lill: Olympia Theatre in Dublin is an absolute beauty!

Eline: I got to say the same as Lill on this one!

Gøril: There’s always lovely bigger venues like Albert Hall in Manchester and Olympia Theatre in Dublin (such beautiful venues!). But, we’ve also been touring a lot in the outskirts of Norway, where we’ve played in barns, small churches and other beautiful buildings on the top of mountains, in the forest or down by the sea. One of my favourite ones is a tiny church in a small town called Sørvær on a big island called Sørøya. The church is located on the edge where the mountain meets the sea. The only thing you can see is the small town from the left window and the blue and big ocean on the right.

Lill: I’ve been listening a lot to D.D Dumbo lately, as well as Tweed & Hyenas, Frank Ocean and Jónsi.

Eline: I’ve just stumbled upon Aldous Harding and been enjoying her album Party this last week. When that’s said Unknown Mortal Orchestra is always on the top of my list.

Gøril: This is always the hardest question for me as I tend to listen to loads of different music. I often have periods where I listen a lot to one artist or band before it changes again and again. The ones I keep coming back to is Sufjan Stevens, Joni Mitchell and Jonas Alaska. At the moment I listen a lot to a Sapmi artist from Sweden called Sofia Jannok.

Lill: I’ve seen so many great movies the past few months with beautifully complex characters and stories which has been very inspiring.

Eline: I get a lot of inspiration from watching movies and series, I always use songwriting as an excuse to sit down and watch a good movie with an interesting story.

Gøril: Coming from a county where it only lives about 70 000 people, but where the land is bigger than the size of Denmark, I’ve always loved being outside in the wild nature. Even thought it might sound a bit cheesy, the nature gives me the biggest inspiration for songwriting.

Everyone: This is such a difficult question to answer..! As I SEE RIVERS is still just a baby, we are continuously evolving and growing, and in that sense perhaps the freshly released ‘Give Up’ is the best representation of what we’re currently exploring. However, without all the other songs we’ve ever written and recorded we wouldn’t have gotten to this point.

Everyone: Right now we’re actually on tour in Norway with artist Fredrik William Olsen. When we get back home to beautiful Wales in June we have a few lovely festivals such as Unearthed In a Field and Underneath the Stars, and then we’ll be releasing our second EP Play It Cool in July!


Catch them live at one of the following UK dates -

20.07.18: CAWTHRONE, Underneath the Stars Festival