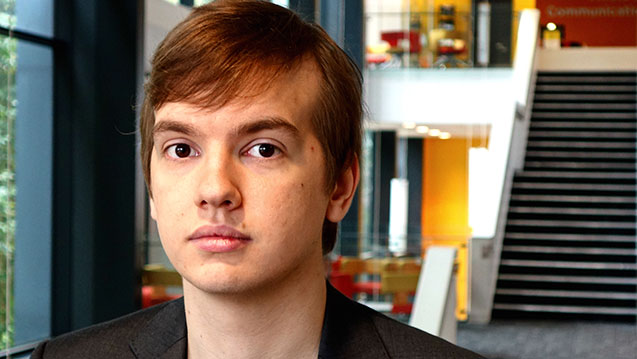 The fast-rising composer is lining up for a huge 2018, with a coveted place on PRS for Music and Berkeley Ensemble's inaugural Accelerate programme already secured...

What? Impressive, drama-laden works for chamber, ensemble, orchestra and opera.

What’s the story? Late last year, Robin became one of the youngest ever recipients of a British Composer Award for his recorder quintet In Feyre Foreste.

It was chosen to win the Small Chamber category, above works by Laurence Crane and Christian Mason, garnering Robin his first official acknowledgement at the prestigious annual ceremony.

But it’s not the first time Robin has been earmarked for excellence – while studying at the Royal Academy of Music under Edmund Finnis and David Sawer, he was awarded the Eric Coates Prize for his orchestral work Movado.

Keeping up the momentum into 2018, he has just been announced as one of eight composers selected to take part in PRS for Music’s inaugural Accelerate initiative with the Berkeley Ensemble.

Over the course of the year, Robin will work with the Ensemble to create a new piece, which will be premiered at St James’ Church, London, in November.

Ahead of the concert, he will attend a series of workshops and career development sessions aimed at helping all eight composers advance their vocation.

In addition, this Friday (26 January), NMC Recordings will release Robin’s lauded work Zorthern, which will be accompanied by a performance by the Northern Sinfonia at The Sage, Gateshead, on Saturday.

Also this year, new works from Robin will be performed by the LSO Chamber Ensemble at LSO St Luke’s, London (July) and by the East London Symphony Orchestra at St John of Jerusalem Church, London (August).

Sounds like? One of the strongest new composing voices working in Britain right now.

Predicted to? Becoming increasingly high profile this year as he works on new pieces for the Berkeley Ensemble and the LSO Chamber Ensemble.

http://robinhaigh.com/
New Music
Back to top