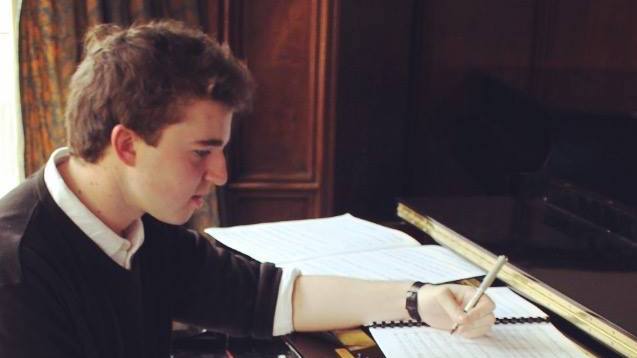 The award-winning composer has gone from strength to strength since winning BBC Young Composer of the Year in 2012, becoming one of the UK's freshest new voices.

What? Award-winning composer going from strength to strength since winning BBC Young Composer of the Year in 2012.

What’s the story? Still only in his early twenties, Alex has composed for a wide variety of artists and ensembles, including the Orchestra of the Royal Opera House, vocal ensemble Tallis Scholars, pianist Malcolm Martineau and virtuoso flute player Sir James Galway.

His music has received airplay on BBC Radio 3 and has been performed both across the UK and internationally.

Last year, he was one of six emerging composers from around the country to be picked to take part in London Symphony Orchestra’s Panufnik Composers Scheme, receiving composition opportunities, and workshops at the Barbican with the likes of Dutch conductor Bernard Haitink.

After winning BBC Young Composer of the Year in 2012, his piece Fanfare opened the 2012 International Olympic Committee session, performed by Sir Antonio Pappano and the Royal Opera House orchestra to accompany the entrance of Princess Anne.

Alex currently studies at the Royal Academy of Music, supported by the Countess of Munster Musical Trust, and has received critical acclaim for his works, with Gramophone called him 'a major presence'.

Keeping up the momentum in 2018, he's written a requiem to mark the First World War centenary which will be premiered on 9 June 2018 at Holy Trinity Sloane Square in London. He also appears at the Young Composers Showcase at Ludlow English Song Weekend on 6 April, alongside Helen Grime and students from the Royal Welsh College of Music and Drama.

Sounds like? One of the UK's freshest new composing voices.

Predicted to? Up the ante this year, with more commissions in the works.

www.alex-woolf.com
New Music
Back to top