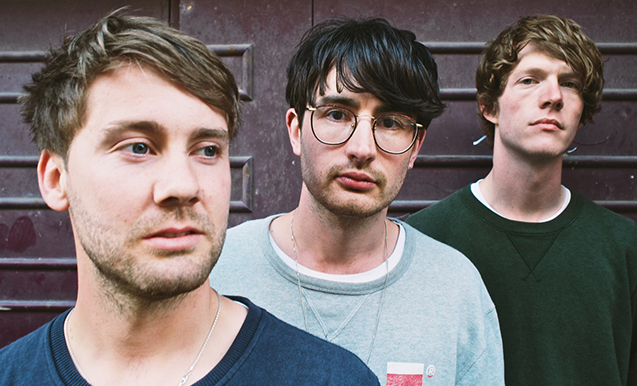 What’s the story? Adam and Leigh first met Stuart when he launched a Chichester club night back in 2011 to inject a shot of pure adrenalin into the veins of the town’s limited nightlife.

They soon bonded over the fruits of his DJ bag – where nuggets from Wire and New Order nestled against old Le Tigre seven-inches – developing a deep love of all things post-punk.

Keeping the fuss to a minimum, the trio learned to craft taut, tight, indie-rock led by thudding drums and scuzzy guitars.

Their lively jams soon caught the ear of indie label FatCat, and they’ve since cut their teeth playing live with kindred spirits including Parquet Courts and Temples.

It’s a riotous bundle of three-minute anti-pop tracks and dirty garage-rock belters – with songs emerging from layers of feedback and frenetic beats.

It picks up nicely from where 2013 debut Grin left off, and shows a band reaching the height of their dishevelled, deadpan powers.

Don’t miss them live over the coming weeks – they’re at Brighton’s Patterns on 19 December, followed by the Barfly in Camden on 20 January.

Predicted to? Hit their stride in early 2016 as Modern Dancing makes it into ‘Best Albums of 2015’ lists…

Must hear? The classic Television vibes on Flowers: