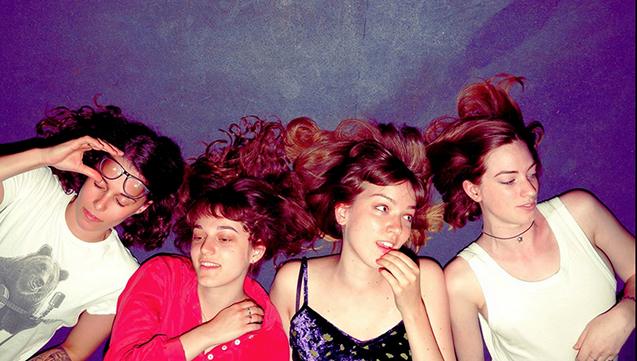 The Big Moon are a formidable indie girl gang with fire in their bellies and a fistful of melodies. Like Tuff Love hooking up with Elastica, they've got the tunes and the swagger - expect big things this year...

What? Formidable indie girl gang with fire in their bellies.

What’s the story? The Big Moon have been together for barely a year. It all came together for Juliette when she fell in love with the meaty, beaty rock ‘n’ roll of the Fat White Family and decided to have a crack herself.

Just 12 months on and the girls have mastered their ramshackle rehearsal studio and self-produced a clutch of bright and buzzy indie-pop songs that have delivered a meteor shower of praise.

Their debut track, Eureka Moment, marked their arrival last spring with a flurry of scuzzy guitar licks and proper song at its heart.

They’ve since upped the ante with crackers Sucker and The Road, a pair of fizzing tracks that linger long on the ear.

They topped off an eventful 2015 with support from PRS for Music Foundation and BBC Introducing to attend the lauded CMJ music showcase in New York.

A stint on DIY magazine’s Neu tour with VANT and INHEAVEN followed, while the band can count The Vaccines and Ezra Furman  among their stage fellows, having opened for both during 2015.

Catch them supporting The Maccabees later this month - and be left with no doubt, this fourpiece mean business in 2016...

Sounds like? Tuff Love hooking up with Elastica and Hinds.

Predicted to? Stun with their debut album, expected soon…

Must hear? Perfect slacker-rock love song Nothing Without You: