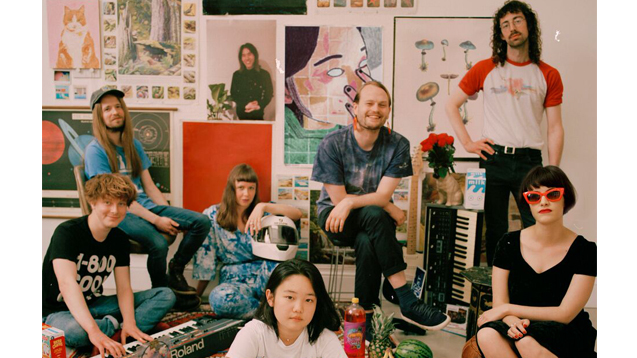 Who? Superorganism are an eight-piece international collective.

From where? Recruited from London, Japan, Australia and New Zealand, the band have set up base in east London’s Homerton.

What’s the story? The identity of Superorganism has been the subject of much speculation.

After the band’s debut AA single It’s All Good / Nobody Cares landed seemingly out of nowhere and into the consciousness of superstar fans like Frank Ocean and Vampire Weekend’s Ezra Koenig, the internet was awash with theories: was it Damon Albarn under a new pseudonym? Or maybe a new project from Tame Impala’s Kevin Parker?

A melting pot of technicolor sound and visuals from pop's past and future, all we know is that it's the work of Japanese singer Orono and her merry gang of pop culture junkies.

The band found their feet after sending Orono a demo over Facebook which she cooked up a vocal part for, recording it on Garageband. That track was the undeniably addictive, off-the-wall Something For Your M.I.N.D. Superorganism was born.

With immediate support online from the likes of Stereogum, NME and endless blogs, it didn’t take long for the buzz band to be snapped up by Domino.

In fact, demand for the band is so massive that their first ever UK show is at the 700-capacity Village Underground. It promises to be unmissable...

Sounds like? For fans of The Moldy Peaches, MGMT, Gorillaz.

Predicted to? Deliver an unforgettable debut UK show at Village Underground on 5 October.. Do yourself a favour and be there…

Must hear? – Something For Your M.I.N.D.


www.facebook.com/SPRORGNSM
New Music
Back to top