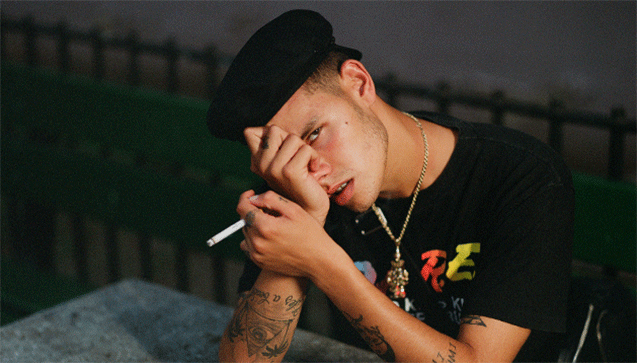 Get to know everyone's favourite new rapper slowthai, as he showcases his explosive wares on a sold-out UK tour this week and next...

Who? slowthai is the pen-name of 23-year-old Tyron Frampton.

What? A rising MC who treads a fine line between rap, grime and garage.

What’s the story? Tyron has been spitting bars since the tender age of 12, translating the world around him via handicam freestyles loaded with adolescent charisma.

Influenced by the music of his mum (garage and jungle) and inspired by the older kids on his Midlands estate, slowthai has incubated an authentically British rap style far from the influence of London’s illuminati.

A string of tracks this year have set him out as a true spokesman for his scene, covering everything from the complications of millennial masculinity to working class angst and the view from his forgotten corner of rural England.

It’s potent stuff that has chimed with everyone from Gilles Peterson and Zane Lowe to UK rap royalty Skepta, who invited Tyron to be one of the new faces on his Nike x SKAir campaign.

His most recent EP, RUNT, dropped last Friday and showcases Tyron at his most explosively unpredictable and raw.

Its fast-paced wit and lyricism clearly marks him out as one to watch, while his sold-out tour, which kicks off today in Dublin before heading to the UK tomorrow, only underlines the potency of his currency right now.

Predicted to? Get visceral on his upcoming UK tour, with a live persona that sits somewhere between snarling punk frontman and crowd-surfing thrill-seeker.

Must hear? All of RUNT, but Disneyland is a good place to start...