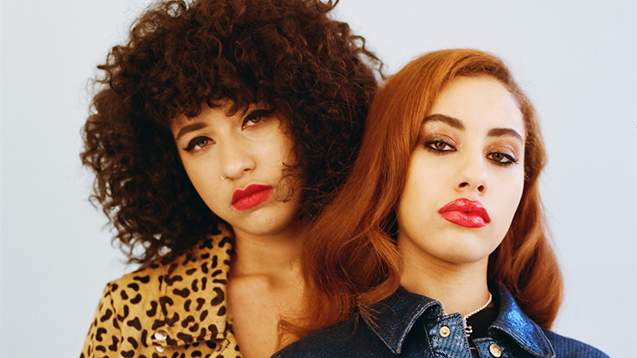 Meet the sneering, feminist punk sisters that have been bigged up by Slits legend Viv Albertine and godfather of punk, Iggy Pop.

Who? Skinny Girl Diet are sisters Delilah and Ursula Holliday.

What? Grunge-heavy feminist punk with lashings of attitude.

What’s the story? Formed in 2011 while they were still teenagers, trio turned duo Skinny Girl Diet are a sneering, bad-ass sibling pairing with immaculate punk credentials.

Their first ever gig was with Slits legend Viv Albertine and the Television Personalities, while the godfather of punk, Iggy Pop, bigged them up recently on his BBC Radio 6 Music show, saying: 'Here are some people who just want to reach out and grab your ears.'

'We wanted to take over the internet so when you search "Skinny Girl Diet," you find three punk girls, instead of the diet,' they told Vice of their band name, while they donned period-stained white dresses for the artwork accompaning their 2016 debut album Heavy Flow.

On-stage, the sisters' have been bringing their loaded sound to venues all over the UK, playing with the likes of Shopping, Fat White Family and Primal Scream.

Catch them next at Paisley's The Bungalow Bar on 4 February for an Independent Venue Week gig curated by Nadine Shah and funded by PRS Foundation.

Sounds like? Alt-rock heroes The Breeders mixed with some Courtney Barnett slacker appeal.

Predicted to? Continue their assault on stages and deliver a highly-anticipated follow-up to Heavy Flow.

Must hear? It's a toss-up between OKAY and their inspired cover of Dusty Springfield's Spooky.