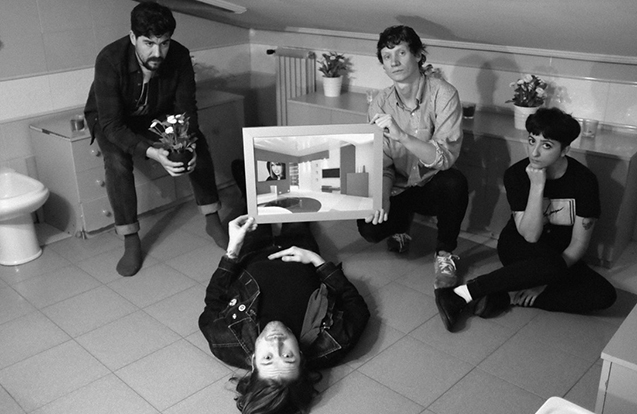 Crunchy, wonky punk-rock quartet Sauna Youth peddle the sort of compact intensity and bruising riffs that wouldn't sound out of place on a Stiff Records compilation circa 1977...

From where? Originally Brighton, now London.

What’s the story? Not content with being in one hard-working DIY punk outfit, members of Sauna Youth also twilight as Monotony, Tense Men, Primitive Parts, Feature and Cold Pumas.

All this extracurricular activity points to a band brimming with energy and irregular ideas, a foursome intent on leading the new punk-rock charge.

They first came together back in 2009 through their mutual love of furious noise, wailing guitars and unstoppable beats.

Now signed to the inimitable Upset the Rhythm label, the band are on to album number two – Distractions. Its compact intensity and bruising riffs make for a thrillingly abrasive listen, a perfect follow-up to 2012’s Dreamlands.

Their musical methods and lyrical depth make them a draw for any discerning indie-rock fan, and over recent months Sauna Youth have recorded two sessions for BBC Radio 6 Music’s Marc Riley and were invited to play DRILL Festival by Wire.

Next on the cards is an appearance at The Lughole punk weekender in Sheffield this coming May, with kindred spirits including Protex, Orden Mundial and Cianuro.

They’re also in the middle of recording a two-song seven-inch single as Monotony and will be issuing a collection of tracks from the first four years of Sauna Youth.

Sounds like? Punk at its best – fast, raw, loud.