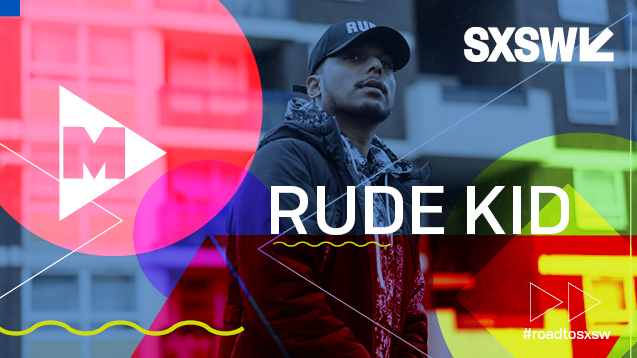 UK grime producer and Kiss Radio host Rude Kid will be flying the flag for the sound this week at SXSW thanks to PRS Foundation backing. We get to know the architect of grime's future...

What? Producer, DJ and influencer helping the latest, freshest new wave of UK grime blow up.

Rude Kid is fast becoming a lynchpin among the UK grime artists doing their bit to take the scene’s beats and bars to mainstream and international ears.

While grime is fast becoming a byword for British pop music, thanks to the ongoing success of Skepta, JME, Wiley and of course Stormzy, Rude Kid is in their slipstream and coming up fast.

His star has been in the ascendance over the last few years, providing beats for the likes of Skepta and JME as well as gaining props from radio tastemakers Mistajam and Annie Mac. It’s his eclectic style, using flecks of dubstep, UK funky and garage to construct his steely productions that are ensuring people are sitting up and taking serious notice.

2016’s One Take is arguably his biggest moment to date, with Ghetts, Chip, Yungen and Stormzy among the MCs going head to head with the production.

While his tunes have been used across DJ Hero, various adverts and even feature films, he’s also the voice of weekly Kiss FM’s grime show helping celebrate and showcase the best new music coming out of the scene.

After premiering his new Banger After Banger with Ghetts at Fabric, this week he’ll be doing even more for the genre with his PRS Foundation-backed trip to SXSW in Austin. He’ll be performing alongside Frisco and DJ Maximum as well as Logan Sama…

Predicted to?  Destroy SXSW this week - you can catch him on 14 March at The Main II and on 16 March at the Scratchouse.

Must hear? Banger After Banger is his new moment with Ghetts that will be getting some serious rewinds over 2017.

Listen to Banger After Banger below.