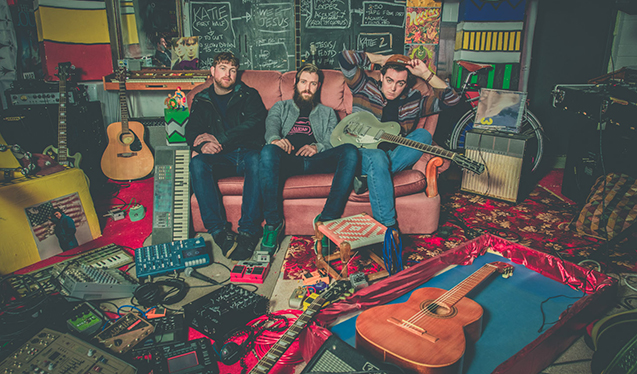 Not to be mistaken with the late-eighties Seattle college-rock band of the same name, Merseyside trio Pure Joy are purveyors of blissed out indie-pop and mellow psychedelia. Don't miss.

What? Ecstatic psych-rock with an attention deficit disorder.

From where? The Wirral.

What’s the story? Not to be mistaken with the late-eighties Seattle college-rock band of the same name, Pure Joy are purveyors of blissed out indie-pop and mellow psychedelia.

Rising from the embers of a clutch of Merseyside acts last year, the trio are now serving up a satisfying sonic platter, all cooked up in their Wallasey-based Fresh Goods studio.

So far, band's buzz-heavy sound has as much in common with MC5 and Big Star as it does the split-personality psych of Animal Collective or Jagwar Ma.

Over their 37-minute debut record Bang Flower (released 1 April), they deftly dip and dive from sun-dappled soundscapes to anthemic bubblegum choruses – an impressive calling card for a band fresh out of the blocks.

They’re celebrating the release of the record at a launch party this Saturday (9 April) at the Buyers Club, Liverpool, followed by upcoming appearances in the city's Festevol (1 May) and International Festival of Pyschedelia (25 September).

Sounds like? The best bits of Tame Impala, Kurt Vile and Flaming Lips.

Predicted to? Be coming to a BBC Introducing festival stage near you sometime soon…

Must hear? The whole of euphoric debut LP Bang Flower.