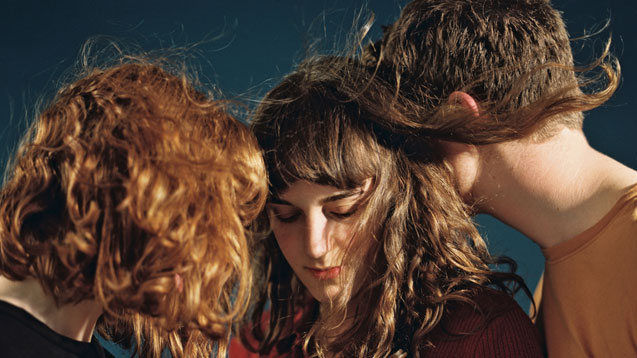 London trio Our Girl deal in pleasingly gooey vocal melodies with an unsettling undercarriage of grungy guitars. Get to know them before their Bill Ryder-Jones-produced debut LP lands...

Who? Soph Nathan (from The Big Moon), Lauren Wilson and Josh Tyler.

What? Loved-up indie-rock with bite.

What’s the story? Overlooking any obvious Big Moon comparisons, Our Girl sound a bit like the harmonic lovechild of The Sundays and Dream Wife – pleasingly gooey vocal melodies with an unsettling undercarriage of grungy guitars.

They’ve been playing together since 2016, dropping the ace, fuzzed-out EP Normally in November of that year. Releases were a little sporadic after that, with odd days at studios crammed in among full-time jobs and other projects.

But that all changed in September 2017, when they decamped to Eve Studios in Stockport to record with Bill Ryder-Jones for a week.

Upstairs they slept in single beds, ‘like being on a school trip,’ Soph remembers, while downstairs they mucked about in a paradise of studio wizardry and ‘freaky, reverby rooms’, losing hours and hours to wonky guitar effects.

They returned to London with loads of tracks up their sleeves, including latest release I Really Like It and swirly shoegaze anthem Our Girl, both of which got a live airing at last week’s PRS Presents.

The gang also have their debut LP, Stranger Today, up their sleeves, which will see the light of day on 17 August via Brighton label Cannibal Hymns, also home to Dream Wife, Tiger Club and Abbatoir Blues.

In celebration, Our Girl hit the road in August and September, with their first date at the Pickle Factory, London, on 20 August.

Predicted to? Deliver one of the indie albums of 2018.

Must hear? Hard to choose between I Really Like It and Our Girl, but here goes…