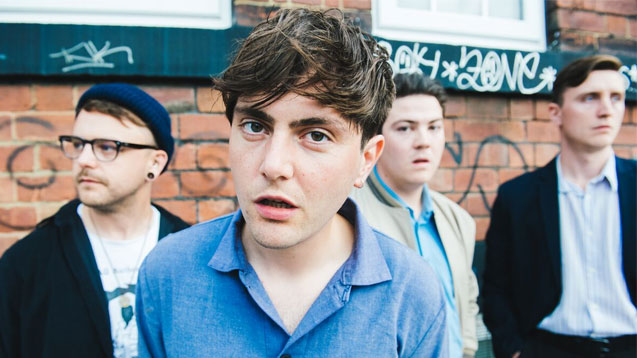 If you ever needed proof that UK guitar music is alive and kicking, then caustic noiseniks LIFE are your band. They're out on the road, so if you haven’t indulged yet, now’s the time…

What? Blistering agit-punk that’s been brewed far away from London’s leering eye…

What’s the story? If you ever needed proof that UK guitar music is alive and kicking, then caustic noiseniks LIFE are your band.

Their snarling missives and scratchy guitars are born from the general confusion, chaos and calamity that’s fuelled all the best guitar-drums-bass line-ups of the last 30 years.

But like IDLES, LICE and Bad Breeding, they’re talking directly to the overworked, underpaid millennials currently bearing the full brunt of austerity.

Theirs is a vital voice, albeit with more hooks, tearing through the background noise with relentless rhythm and visceral disorder.

Last year’s debut album, Popular Music, offered a big sonic punch right between the ears, getting Louder Than War, DIY magazine and a gaggle of BBC Radio 6 Music DJs in a right tizz.

It also led them to SXSW this year, where they were supported via PRS Foundation’s International Showcase Fund to play at the DIY, BBC 6 Music and Fluffer Pit Party shows.

Now preparing a fresh onslaught, their first new material since Popular Music lands in the form of single Grown Up on 15 June.

In support, they’re out on the road, bringing their wares to a string of cities around the UK (details below) including Brighton for The Great Escape this week.

If you haven’t indulged yet, then now’s the time… this lot are pure anarchy live.

Sounds like? Everything you want in a guitar band.

Predicted to? Rip up The Great Escape this week.