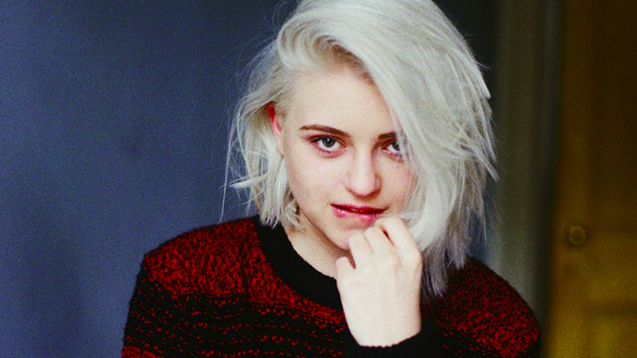 Scottish teenager Kloe is making waves, having been picked up by Charli XCX’s iamsound and released a string of killer singles. Meet a new pop star without any filter…

Who? Kloe is a teenage 21st century music star.

What? A blast of refreshing, fluorescent pop somewhere between Charli XCX, Sky Ferreira and CHRVCHES. With no filter.

From where? Originally Glasgow, now based in London.

What’s the story? Kloe’s rise from waitress to star in waiting has taken placed at a frenetic pace over the last 12 months.

She scored a headline slot at infamous Scottish venue King Tut’s and released debut single Grip. The record succeeded in being picked up by iamsound, the LA-based imprint which helped launch the careers of Florence + the Machine, Little Boots and Charli XCX.

Now shacked up with iamsound in the states, she’s since been picked up by Columbia Records in the UK, releasing Touch, produced by Lewis Gardiner from Prides and most, recently, Liability.

Citing everyone from Stevie Nicks and Joni Mitchell to The Weeknd and Drake as influences, Kloe is a modern pop star for generation of music lovers weaned on playlists, and unafraid to be as honest online as she in reality.

If you’re not caught her play over the summer at SXSW, The Great Escape or supporting Marina and the Diamonds earlier in the year, then she’ll be at Festival No. 6 performing at the Lost in the Woods stage, presented by PRS for Music. She’ll be playing alongside the likes of Melt Yourself Down, Beach Baby and Pumarosa…

Must hear? Liability is her latest release. Listen below.