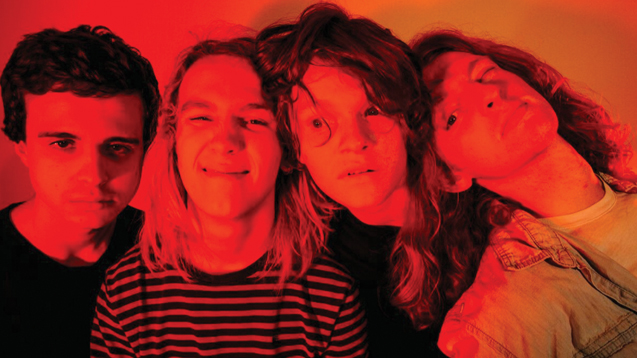 Teenage indie-rock four-piece King Nun have landed a string of adrenaline-fuelled punches on the face of 2017, laying down the foundations for a truly massive 2018. Don't miss this fearless bunch...

What’s the story? We first clocked King Nun at the tail end of 2016, when they dropped their clanging debut single Tulip and joined PRS for Music.

Despite its florid name, the track was a real ear-bleeder, with ferocious guitar-fuelled chaos hinting at the carnage just about to break.

Fast forward to December 2017, and the four-piece have certainly taken the year by the scruff of the neck and given it a serious shaking.

Tracks like Hung Around and Sponge landed a direct adrenaline punch of minimal melodics right between the ears, fuelling their energetic live antics and attracting love from all corners of the indie-rock press.

Now signed to Dirty Hit, the label behind the stellar success of The 1975, Wolf Alice, Superfood and BBC Sound of 2018 longlisters Pale Waves, they’ve been sharing the bill with the latter two up and down the country for most of 2017.

With playlistings on BBC Radio 1 in the bag, plus a place on DIY’s Class of 2018 tour, which kicks off with a launch party tonight (Monday), things are about to get massive for this four…

Get to know em now before it all gets a bit crazy.

Sounds like? Jack White has relocated to the grimy underbelly of London and digested a rich diet of British indie anthems…

Predicted to? Get truly massive in 2018 with loads of new tunes on the way…

Must hear? Hung Around -