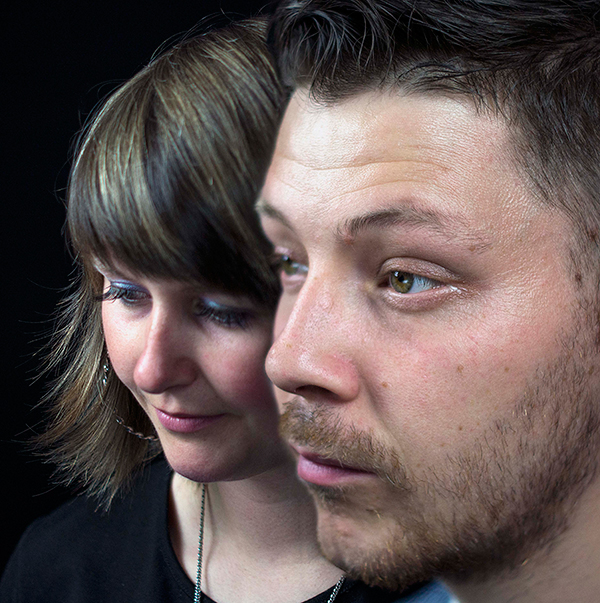 Who? Audrey Tait and John Lowis, aka Louie Boy.

What? Scottish hip-hop of the strictly alternative variety.

Their unique take on hip-hop balances fluid social literacy with intense rhythms that skip from swinging jazz to live techno without missing a beat.

Pitching themselves somewhere in between GBh Deadlife, Rage Against the Machine and Arab Strap, the pair draw influences from global alternative hip-hop culture, leftfield electronics and indie.

Now with two albums under their belts and an augmented live band which takes in bassist Fraser Sneddon and synth-player Dave Calder, it seems Hector Bizerk are at the top of their game.

Latest longplayer Nobody Seen Nothing marked a massive step up for the band in terms of production, and garnered them a nomination for the 2014 Scottish Album of the Year Award.

Louie’s rabble-rousing banter on social disorder, poverty and violence has put him at the forefront of Glasgow’s alternative rap scene, aiding and abetting the band’s slow-burning success.

Their story so far is framed by a wider renaissance enjoyed by Scottish hip-hop over the last couple of years, with Loki, Stanley Odd, Young Fathers and Gasp also producing equally compelling releases.

But Audrey and Louie look set to break out of the confines of the low key regional movement to become tipped across the whole of the UK and beyond.

Following a hook-up with NME, the pair will travel to South by South West in Texas later this month to play at the magazine’s joint showcase with PRS for Music.

Leading up to the trip, they have performed a string of sold-out shows north of the border throughout January and February.

They were also namechecked by The Sun’s Six of the Best – a round-up of acts tipped for success in the next 12 months.

Their February EP release The Bell That Never Rang, coupled with forthcoming The Waltz of Modern Psychology - the soundtrack album for an upcoming play about the troubled cancan dancer, Jane Avril - will no doubt add fuel to the fire.

Predicted to? Become a nationwide alt hip-hop concern over the rest of 2015.

Must hear? The angsty honesty in Party at A&E and the political tension in My Little Bigot.