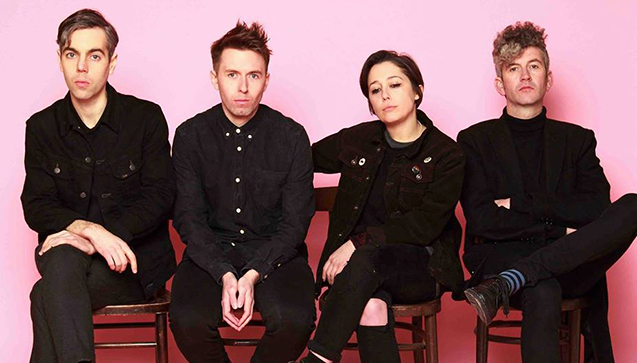 Girls Names are an arty, angular indie-rock quartet from Belfast. Don't miss their upcoming tour, which will see them bringing their lean, muscular sound to 10 venues across the UK, starting this week.

What’s the story? Since 2010 Girls Names have gradually morphed from a lo-fi goth duo into a fully-fledged art-rock band with three albums now under their belts.

In among the feedback and submerged electronics, Cathal’s voice rises to the fore, his lyrics unearthing the buried memories of his hometown’s political unrest and wartime violence.

Latest album, Arms Around a Vision, released through Tough Love Records, has cemented their resolve and sharpened their sound, bringing plaudits from the likes of NME, Clash Magazine and Drowned in Sound, to name a few.

With a thrilling live set comprising of this new material, alongside tracks from 2013’s triumphant The New Life, they’re fast building a solid rep for uncompromising gigs (- don’t miss their UK dates later this week.)

And, with a date in the diary at this year’s SXSW – playing the PRS for Music showcase alongside Clean Cut Kid and Loyle Carner – it won’t be long before the US are lapping up their bleak brilliance too.

Sounds like? David Gedge forming a supergroup with Bauhaus and Spider Webb.

Predicted to? Expand some minds and blow some eardrums at their forthcoming SXSW show in Texas.