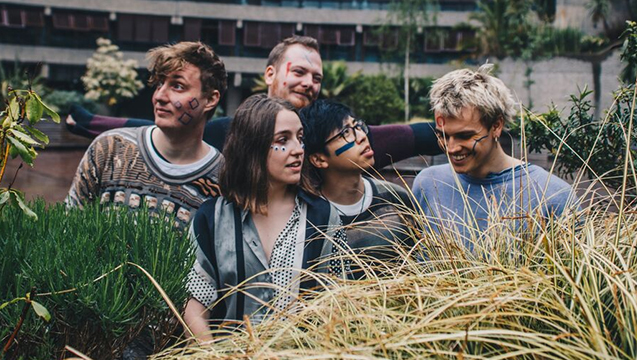 Who? flirting. are Andy Potter and Arthur Evitt on guitars, Kevin Choi on bass, Poppy Waring on vocals and William Sorenson on drums.

What’s the story? flirting. first came together at the tail-end of 2015, bonding over a mutual love of noisy pop, drowsy indie-rock and offbeat electronics.

From Madonna to My Bloody Valentine, by way of David Bowie, they toy with spoken-word vocals, lush shoegaze guitars and flamboyant pop to breathe new life into the guitar band get-up.

Their first single, Wouldn't You, was released in 2016, and racked up thousands of plays on Soundcloud with no label support, no press and no manager.

Since then, they’ve performed up and down the country under their own steam and opened festivals including Truck.

Things got serious earlier this summer when they dropped six-minute indie-pop opus Peppermint, winning them love from the likes of DIY and NME.

Their debut EP, This Would Be Funny If It Were Happening to Anyone but Me, from which Peppermint was lifted, lands on 5 October via Hidden Bay Records and Noise is Therapy. Pre-order it here.

They’re celebrating with a release party at The Old Blue Last, London, on 6 October.

Must hear? Fresh and spritely Peppermint: