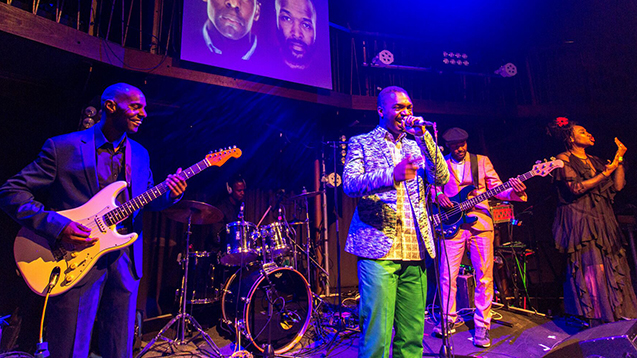 What? 16-bit, hip-hop and Afropunk-fused electronics.

What’s the story? The Fish Police formed in 2010 when bassist Charles taught Dean and Matthew, who both have autism, at London creative arts charity, Heart n Soul.

The group's neurodiverse sounds centre around the unique imagination of frontman Dean, who riffs about everything from chicken ('there's a special way I like my chicken, I'm gonna tell you how') to cactuses  ('I wish I had a cactus of my own, boy oh boy it would grow so tall').

With influences ranging from computer games and cartoons to fast food and Japanese culture, the band have created their own infectious blend of electronic afropunk. It's surreal, genre-bending and laced with funk guitar lines, glitchy synths and drum machine beats that'll make you smile from ear to ear.

Having performed at some of the world’s most iconic music venues including New York’s Lincoln Center, London’s Royal Festival Hall and Tate Modern, they're about to take things up a gear with a showcase at SXSW in Austin, Texas, where they've secured support from PRS Foundation’s International Showcase Fund to attend.

Dean will also feature in a pioneering SXSW discussion exploring neurodiversity and its impact on music and the arts.

Predicted to? Get scores of bookings, deals and label offers in Austin.

Must hear? Something Interrupted -

The Fish Police play at SXSW on Thursday 15 March at Esther's Follies.
New Music
Back to top