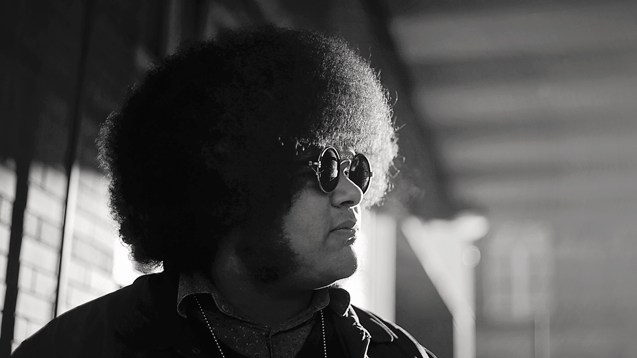 Get to know the Teeside wonderkid who layers elastic basslines with electro-funk synths and snappy spoken word to conjure a sound that sits somewhere between Beck, De La Soul and Andre 3000.

From where? Redcar, Teeside.

What’s the story? Dylan Cartlidge is an artist who doesn’t just combine genres and influences, but instead hurls them at one another with abandon, turning the resulting musical gloop into thunderous, uninhibited rap and wonky pop.

The 23-year-old Teesside wonderkid has a knack for conjuring up musical weirdness that shows off his multi-instrumentalist talents to the ninth degree.

By layering elastic basslines with electro-funk synths and snappy spoken word, he’s come up with a sound all of his own, which sits somewhere between Beck, De La Soul and Andre 3000.

Since his opening offering, the wild double A-side Love Spoons/Strawberry Blonde’s Snip, Dylan has made it perfectly clear he’s in his own lane here and doesn’t really care too much about sitting within preconceived notions of genre boundaries.

Testament to his wayward talents, Dylan has had a stellar year, with Matt Wilkinson of Beats 1 Radio and BBC Introducing’s Huw Stephens stepping forward as fans.

Now lined up for the last PRS Presents of 2018 later this week, alongside Novelist and Oscar Jerome, and with a bunch of live dates in the diary until mid-December, it looks like the Teeside powerhouse is only just getting started…

Predicted to? Having recently worked with Grammy Award-nominated James Dring (Jamie T, Gorillaz) and Danger Mouse, and currently in the studio cooking up more new sounds, we reckon Dylan Cartlidge is set to stun in 2019.

Must hear? The sonic oddity that is Wishing Well…

For more, see http://dylancartlidge.com/
New Music
Back to top