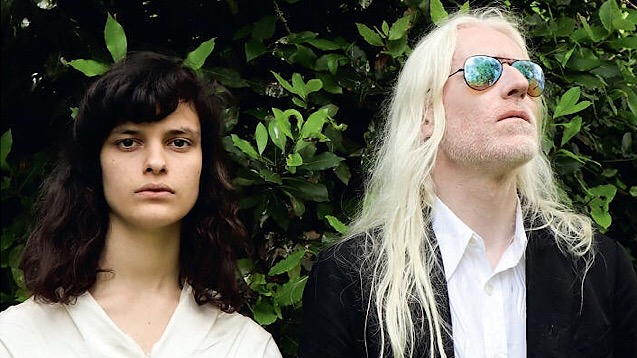 Primal, instinctual and full of zany moments: climb aboard the experimental sonic rollercoaster that is Audiobooks. Their no-holds-barred synth-pop is set to go off, so don't miss their debut album...

Who? Evangeline Ling and David Wrench, aka Audiobooks.

What's the story? Audiobooks might on the face of it, seem an unlikely pairing, but just one listen and holy synth balls, do they make so much sense together. Made up of 21 year old art student/musician Evangeline Ling and acclaimed producer/mixer David Wrench (Frank Ocean, The xx, FKA Twigs), the duo have been brewing up musical mayhem ever since meeting at a party in London.

With a set of 'odd stories as text messages' on her phone, Evangeline went into David's studio the next day where they set to work putting it all to music. 'Neither of us are any good at small talk so we just got working and it was crazily fast, everything about it,' David says.

Citing diverse inspiration from Bauhaus and Marilyn Manson to Michael Jackson and Dory Previn, the duo are gearing up to release their debut album Now! (in a minute) on 2 November via Heavenly Recordings.

Primal, instinctual and full of zany moments ('let's go get our legs waxed!' shrieks Evangeline in Dance Your Life Away, like a giddy hybrid of Karen O and Kathleen Hanna), it's an experimental sonic rollercoaster that is set to go off.

Sounds like? A motley cacophony of sounds: comparisons range from Bjork to The Fall.

Predicted to? Blow your mind live and make you dance.

Must hear? Dance Your Life Away -