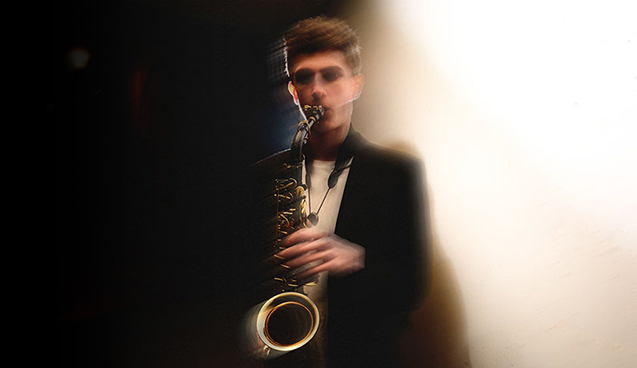 Alexander Bone is a prodigious jazz talent who's performed at the BBC Proms, the whole gamut of UK jazz festivals and has recorded with Nile Rodgers and Rudimental. This one's going places...

From where? Born in Darlington, based in the North East.

His natural ear for melody and his innate timings made the world sit up and notice very quickly, and he was singled out for the inaugural BBC Young Musician of the Year – Jazz Award in 2014.

He’s also performed at the the Royal Festival Hall, the Royal Albert Hall and the Houses of Parliament, and in September 2015, The Last Night of the Proms.

As a composer, Alexander has already written for big band, jazz trios, quarters and quintets, pop/funk/rock bands and full classical orchestras, including the BBC National Orchestra of Wales.

Alongside his notable live airings and compositional skills, he’s a gun for hire across the music industry, playing sax for Nile Rodgers, Rudimental, Kylie Minogue and Liane Carroll, to name a few.

After that, he’ll be appearing at the BBC Young Musician of the Year - Jazz Award Final in Cardiff on 12 March.

As Boney, Alexander produces electronic music, some of which he'll be premiering in Cardiff. He'll be releasing some of these new jazz-hybrid sounds later this year.

Sounds like? An open-minded composer hell bent on bringing jazz to the masses.

Predicted to? Become one of the cornerstones of the more populist sides of the genre here in the UK.
New Music
Back to top