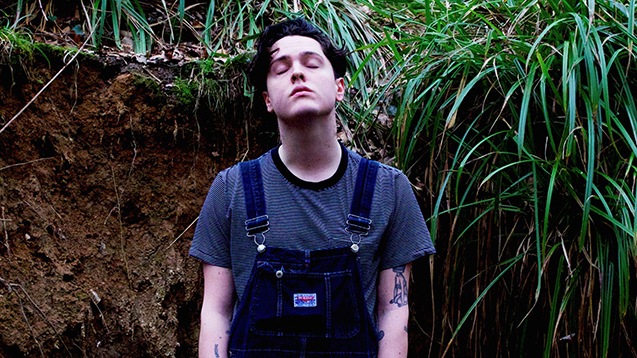 Smoother than velvet and laced with soft psychedelia, Mr Yolk is what hazy dancing-after-dark should sound like. Designer and songwriter Samuel Jones tells us more...

Smoother than velvet and laced with soft psychedelia, Mr Yolk is what hazy dancing-after-dark should sound like.

Blending these harder edges with lush, intoxicating vocals and funk-spiked guitars, the band have hit upon their own dreamy sound, with Samuel at the helm as chief provocateur.

Having honed his songwriting craft in key underground dream-pop bands Velvet Morning and Rocket Ship TV, with Mr Yolk, Samuel says he made a 'conscious decision to use fewer effects' and set his focus on representing the importance of humour and art in song.

Not ones to waste time, the band's first single, Baker Street was released in August along with news of a debut album, Self Portrait.

Recorded in Peckham, Samuel said of his introspective recording process: 'I prefer to be alone. It is a personal thing for me ya know. My own sense of humour and views and in some cases vulnerability are on display.'

Set for release on 27 October via Southend Records, we caught up with the frontman to find out more...

What was the first song you developed an obsession for?
When I was around the age of 15, I used to go to an Oxfam at the top of my road and sift through the records in there. I found The Stone Roses’ first album for £2 and would listen to that and only that religiously for a good while, so I guess my favourite song from that album…which would be Sally Cinnamon. That song is beautiful.

What’s the first gig you went to?
If I remember rightly, it was something like Jamie T at Brixton Academy. When you’re that young, being in a place like that for your first gig experience is quite daunting. You tend to pay attention to practically everything in the room.

What’s the first instrument you ever got hold of?
I got given a Peavey bass because I thought it would be a step-by-step into playing a guitar but it just sat there until I got the courage to learn to play the latter properly.

What is your worst musical habit?
I think any habit a songwriter has is never a negative one. It probably will end up making their processes unique and affect their songwriting in some way. Anyone who sits down and says, 'right, I need to stick to this guideline' is not going to reap much reward from that artistically.

What’s the best piece of musical advice you’ve ever been given?
I haven’t.

Where do you discover new music?
Well I have a record store that puts new releases on the shelves. There’s enough content there to choose from.

What’s your favourite venue?
I played at Moth Club for the Cave Club a little while ago and I thought the space was great. Using an old gentlemen’s club is a nice thing.

Who is your current favourite band/artist?
At the moment I am listening to a lot of Lewis. He has an unbelievable album called L’Amour that sends me off big time.

What inspirations outside of music impact your songwriting?
I work on a lot of visual art and for me sound can be visualised, whether it is glaringly evident or not. I believe the same applies vice versa.

What track of yours best represents your sound?
I have a track called Star Light Head Light on Mr Yolk’s album, Self Portrait, which I think is probably the best description of what I was trying to achieve sound-wise within the record. It is also probably the one I find most fun to play at shows.

What’s next for you?
We have an album called Self Portrait, which is coming out at the end of October and we will be playing a load of shows up to then and beyond. In regards to other music, I am just continuing to do what I’ve always done which is to listen to music, enjoy music and make music. It will continue to be different each time and it will continue to be interesting to me. Mr Yolk is a great platform for that and a great platform for visual projects also.

https://soundcloud.com/mr_yolk_music/nowhere-to-hide-draft-10
New Music
Back to top