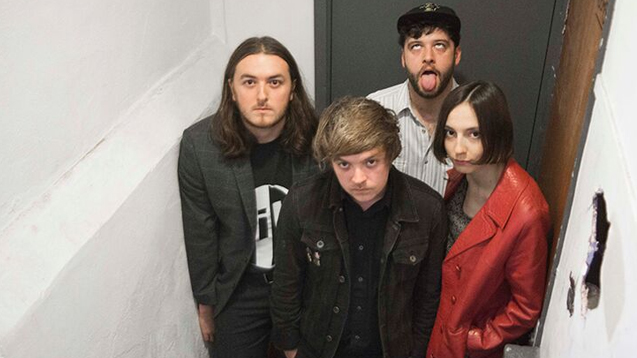 Inspired as much by Philip Larkin’s poems as the feedback of Sonic Youth, Hull’s Vulgarians peddle a great discordant racket. Catch them on their forthcoming headline UK tour…

Hull’s Vulgarians owe a chance encounter with MJ from Hookworms to a creative connection that led to the producer working on their new EP, Almost-Instinct, Almost True.

MJ offered his services and Suburban Home Studios to Vulgarians, having caught them live at Leeds Brudenell Social Club in summer 2016. Almost-Instinct, Almost True is the result, a release taking its title from a Philip Larkin poem and finds the band injecting their guitars with a renewed sense of pulse racing urgency and discordance.

It builds on the success of their 2016 where the band supported HMLTD and performed at The Great Escape for BBC Introducing. They even found time to host their locally famed 'Nelson Mandela Sessions', supporting fellow Hull bands by squeezing lights, projectors and 50 odd punters into their rented digs for live gigs.

Coming off the back of a support slot with The Wytches, they're hitting the road again tonight (10 May) at Headrow House in Leeds. Catch them out on tour and meet them in our 30 seconds below…

We first started writing music because…
We all had the same disgraceful sense of humour and we needed to channel it.

Our music is…
Rough in places atmospherically woozy in others.

You'll like our music if you listen to...
Noisy post-punk.

Music is important because…
Everything else is crap.

Our biggest inspiration is…
Nelson Mandela.

Our dream collaboration would be…
Probably Nick Cave.

To try us out, listen to my song…
Hands Around The Waste.

If we weren’t making music we’d be…
Eating Bobby burritos.

In 10 years’ time we want to be...
Eating Bobby burritos.

Almost-Instinct, Almost True is out now

Watch the video for Hands Around the Waste.