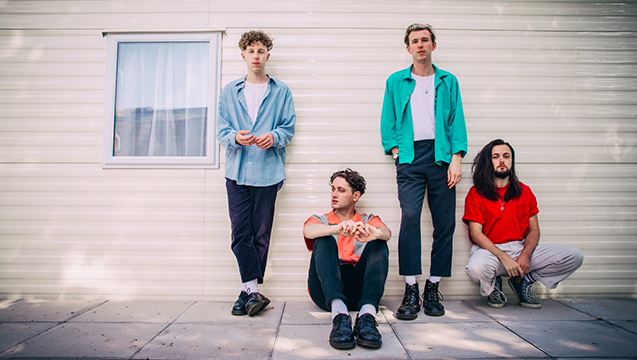 Marsicans have proven to be the masters of a summer-soaked indie rock hit, and their scrappy, charming style has started to win them some serious support.

Leeds quartet Marsicans have proven, through a relatively short career thus far, to be the masters of a summer-soaked indie rock hit, and their scrappy, charming style has started to win them some serious support.

Following on from the huge release of ‘Wake Up Freya’ earlier this year, the guys have just unleashed new single ‘Pop-ups’, a lightening-in-a-bottle flash of pop-infused indie that bursts into life with brash guitar work and infinitely chantable choruses.

Speaking about the single, frontman James Newbigging said: ‘I came back into the rehearsal room one day and found Cale playing a riff on my guitar. When I got home from rehearsal with the riff stuck in my head, I was watching a film online and got a pop-up ad along the lines of ‘Wow, look how much money I’ve made’.

‘It got me thinking about the people in life that make all these false promises to you and try and get you into their crazy schemes. Lyrically, the song is basically just poking fun at those chancers.’

Having toured with the likes of Jaws, Hippo Campus & Clean Cut Kid and recorded a blinding live session of earlier single release ‘Wake up Freya' at Madia Vale studios for Radio 1, 2018 has already been a bit of a milestone year for the boys.

The band are set to hit the road this summer with a huge headline tour spanning the length and the width of the nation, already selling out dates in London, Glasgow, Manchester, Birmingham and Leeds. Not to mention appearances at Tramlines, Reading/Leeds and Kendal Calling festivals.

We caught up with Rob Brander from the band as they prepare for what we can only imagine will be an equally smashing second half of 2018 for the band.

Born in The USA - Bruce Springsteen. My Dad had it on cassette and used to play it in the car. It still makes me feel that same way now that it did when I was a kid.

System of A Down at Manchester Arena for my friend Freddy's 12th birthday. We went to Hard Rock Cafe beforehand and I had a pretty good burger, if I remember correctly.

A nylon-stringed classical guitar from Argos.

Listening to the same records over and over again. I am conscious of it and do try very hard to dive into a new album at least every week, but it's just so easy to drift back into your favourites.

Don't rely on production/pedals/rabbit-in-a-hat tricks to write songs, if it doesn't work on one instrument with a vocal then it isn't finished.

I used to be the King of Myspace in school and would always be banging on about bands that no one had heard of. Nowadays, the King is dead, and so is Myspace, but I'm a recent Spotify convert and find I'm always stumbling across cool new stuff. I think the platform's algorithms work really well for that kind of thing.

The places I visit and the people I meet.

I suppose the most recent release is always a good representation of what we sound like in the present day so: 'Pop-Ups'.

A sick run of festivals and more new music. We might play some more shows later in the year too. Y'know, band stuff.