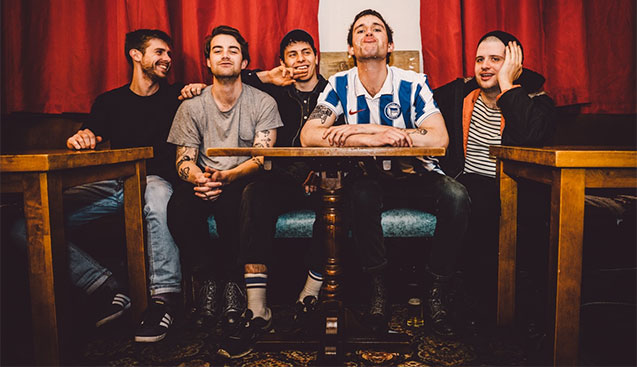 Peckham five-piece YOWL formed out of frustration at the world around them, but they've since swapped their nascent rage for rock ‘n’ roll fervour.

Sick of crap prospects and a city increasingly intent on pricing them out, they’ve developed a classy swagger and lyrical drawl that’s pulled them well out of the doldrums.

Tracks like My Headache Likes to Speak, Teeth and Darkroom come on like The Strokes circa 2001, if The Strokes were from South London and had grown up on a diet of Arctic Monkeys, the Fat Whites and IDLES.

Last year the quintet rack up slots at Pitchfork Music Festival in Paris, Swn, and London Calling in Amsterdam – among loads of UK dates with kindred spirits LICE.

Already this year, they’re making themselves known, with opening slots for Phobophobes confirmed, an ace Amazing Radio mix in the bag, a Hello 2018 show down for DIY  and TWO Independent Venue Week gigs over the next few days (including a bumper one for Strummerville).

Tough. There are almost definitely earlier ones but the first that comes to mind is Diamond Dogs by Bowie. I remember singing that round the house a lot as a kid, trying to get that Bowie inflection down. It’s got some of the most unexplainably cool lines - ‘Dressed like a priest you was / Todd Browning’s beast you was’ still gets me.

The first band of renown I can think of was The Buzzcocks. It was outside and raining hard so my standout memory is the squelching of my socks as I tried so hard to dance.

Pretty sure like many people it was a recorder in school. I never washed it and I remember it got so fucking disgusting. It had a tangible scent to it.

Not cleaning my recorder.

I’m wracking my brains and I can’t think of anything. Not naming names but a guy who was involved with a pretty well-known band - perhaps fleetingly but from his side of the story they were best mates - told us to ‘sack off our lighter stuff and go more down the Nirvana route’. Which is awful advice as we don’t really sound like Nirvana. And I like our lighter parts. So I suppose we’re decent at ignoring bad advice - unless it wasn’t bad advice in which case we’ve made a terrible mistake…

A lot of bands we’ve got into recently we discovered after being on the same line-ups; LICE (toured with these guys last year and we’re well excited to be reunited with them), Sports Team, Nervous Conditions, Curfew - the list is long.

The Shacklewell Arms has always been good to us. They put on stellar shows too. A lot of people we’re fond of frequent there too which helps.

I don’t deal with the instrumental parts too much so yeah, for me whatever I’m reading at the time has somewhat of an impact.

I couldn’t say. If you played, say, Teeth and Darkroom back to back that might give you an idea, but then I don’t think it should be a goal of any band to have one song that encapsulates everything you’re about - otherwise why not just leave it at that?

Well without them we wouldn’t be anything. You need somewhere you can go without being part of a ‘roster’ or whatever. Places that’ll shove you on the bottom of a bill for nothing more than making the effort to ask.

What can we expect from your IVW/Strummerville show?

YOWL play the So Young Magazine showcase in London on 1 February alongside Sports Team and Fur, followed by the Stummerville night in Hastings on 3 February alongside Arrows of Love, LICE, Bloody Knees and Heavy Lungs. Both shows are for Independent Venue Week.