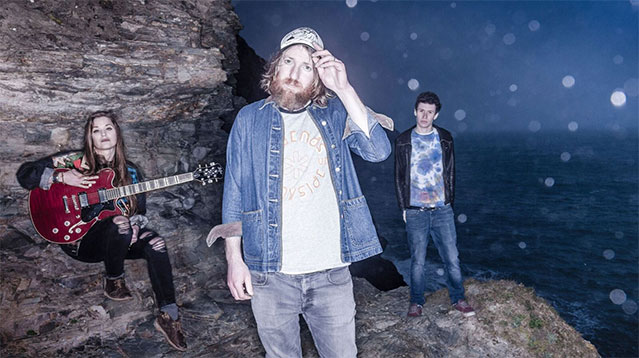 Cornish trio William the Conqueror hail from one of the UK’s most westerly wildernesses, so it figures their musical antenna is dialled in to US grunge and Americana...

Cornish trio William the Conqueror hail from one of the UK’s most westerly wildernesses, so it figures their musical antenna is as dialled in to US grunge and Americana as it is the upbeat anthems of UK acts The Travelling Band and Danny and the Champions of the World.

But while multi-instrumentalists Harry Harding, Naomi Holmes and Ruarri Joseph pay homage to Nashville, they bring their sound to life with the emotional wallop and finger-picking goodness of the English folk tradition.

It’s a recipe that’s already paying back in dividends: their bluesy sounds have taken them right to the heart of the matter, with a show at AmericanaFest in Nashville.

They’ve also shared a stage with Richard Thompson and Van Morrison, courtesy of a nomination for Song of the Year at the UK Americana Awards.

It’s been a fast rise for the trio, who dropped their debut album in August, and whose UK tour (on now, dates below), will spread their music far and wide this winter.

We spent a few minutes with Ruarri to find out more about his worst musical habits, the music that shaped him and the best advice he’s ever been given…

Probably Knocking On Heaven’s Door. It paved the way, led me to learning to play guitar, but obsession I think of as slightly unhealthy, putting songs on repeat, just you and your headphones till it makes you ill. Avalanche by Leonard Cohen springs to mind. Alice by Tom Waits, Tremor Christ by Pearl Jam, all like really intense circumstantial romances that had to end once the war was over or something, you know?  And then you still see each other occasionally and you’ve moved on but that desire is still there, gazing through the confetti of someone else’s parade!

A band called Leash, from South Africa were playing at a pub called The Watering Hole in Perranporth. I must’ve been 12 or 13. I’d never heard music that loud, that close before and to be honest I can’t remember what they were like, only that I’d made up my mind about what I wanted to do with my life. I think they had a song called Magic Mushroom Girl and at the end of the gig the singer asked the crowd if anyone had a spliff he could have a go on and nearly everyone raised their hand.

I wanted drums but had to make do with pans and boxes for a while so guitar was the first real instrument. There was one in the house but I don’t remember anyone playing it until I asked my dad one day and turns out he could play a few Dylan and Cohen songs and that got me started.

I’ve got no discipline around time management but that’s a double-edged sword really. I know I can go missing for hours and not eat or drink or rest my ears if I’m getting into something. It’s pretty unhealthy, but for me the most interesting treasures are at the bottom of those rabbit holes, when you’re drained and your mind is elsewhere everything is unexpected. The thought of setting a timer and clocking in and out to be creative is pretty alien but it’s got to be done sometimes, especially if you’re working with other musicians who wouldn’t mind a cup of tea once every few hours!

I blagged my way into playing double bass for a punk jazz band called The Rhythm Doctors, having never played double bass before. Our first gig together was headlining the Cabaret stage at Glastonbury 2004 and there were no rehearsals, I was just handed a VHS of a gig they did in Germany about 10 years previous, trying to learn choreography and music from dust and blackness. So backstage about to go on and I’m bricking it, barely know the songs, the instrument or the people I’m now in a band with and we’ve never played together. Jerri, the singer, comes over looking genuinely perplexed by my nerves. I frantically fired a barrage of questions at him about what key things are in and how things end and when should I do this and that and he just shrugged, put his hand on my shoulder and said, ‘None of that matters. So long as you look like you know what you’re doing, they’ll believe you.’

Usually on tour with the band. Harry and Naomi have their fingers on the pulse and keep us up to date or play things that I wouldn’t have found otherwise.

To play or to go to? To play I couldn’t pick one coz there’s so many different types. Falmouth Pavilion is the biggest venue we play so that’s a buzz, but then there’s so many little gems and house gigs we’ve done. Greystones in Sheffield springs to mind, Café Irie in Newquay has long gone and only held about 20 people but used to love them too. Favourite venue I’ve been to, if only once, is Theatre Carre in Amsterdam where I saw Tom Waits on his Real Gone tour.

I’ve been listening to Justin Vernon’s The Shouting Matches a lot. It’s really stripped back, drums, guitar, vocal, raw as fuck, great vibe.  You can feel the joy in its creation you know, like the Basement Tapes or something, feels so relaxed and unpretentious. Love it.

I’m digging around in the past at the moment, idiosyncrasies from childhood, writing about things that are so personal I can’t begin to tell you where they come from, just let people make their own minds up about them. It’s a way of getting me to shut up on stage and just play the song instead of feeling the need to give context or explain myself. That’s another bad habit I used to have.

One of the ones where there’s drums, bass, guitars and singing.

We’ve just had a few weeks off touring so I’ve been in the garage making noise and trying stuff out. Back on the road during November then taking Christmas off to reconnect with reality.