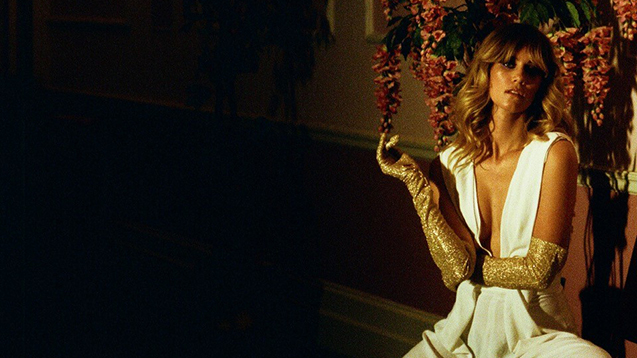 Looking for your next slice of gorgeously shimmering, sugar-coated RnB? Whinnie Williams is here for your fix, with lustrous, high-drama tracks that reveal a star in the making...

Looking for your next slice of gorgeously shimmering, sugar-coated RnB? Whinnie Williams is here for your fix...

As a singer-songwriter, model, DJ and retro interior goddess, there's no doubting that Ms Williams is a fiercely determined one-woman brand.

We've been keeping tabs on her ever since her 2010 days under the Sunday Girl moniker and she's come on leaps and bounds since, teaming up with producer duo Future Cut (Lily Allen, Professor Green, Rihanna) and Will Vaughan of Crystal Bats to hone her slick and buttery pop sound.

Coming on like a Brigitte Bardot-meets Farrah Fawcett 60s temptress, her kitsch aesthetic and stylised visuals (seriously, just check out her Marianne Faithful The Girl on a Motorcycle moment in the Real Damn Bad video, below) are matched by lustrous, high-drama tracks that reveal a star in the making.

New cut What About Me is a slick nineties inspired offering with millennial laments like, 'you only love me on the internet'.

Says Whinnie: 'I was going through a phase where I felt like I was helping a lot of people but wasn’t getting the same back.

'I was in the studio with Will Vaughan from Crystal Bats and we were working on a song and I just sang out the line 'what about me!' I wanted to tap into the Crystal Bats sound with my RnB melodies and I love the combination.'

With a new album promised for 2018, we catch up with the emerging starlet to learn more...

What was the first song you developed an obsession for?
Destiny’s Child - Independent Women lol. I bought the CD from Woolworths!

What’s the first gig you went to?
My first gig was The Subways, it blew my mind seeing a girl play live in an indie band!

What’s the first instrument you ever got hold of?
My dad got me a drum kit and set in up in the kitchen, he still says that’s the reason he got divorced hahahaha.

What is your worst musical habit?
When writing songs, I like to take a few weeks on deciding which melody and lyric I’m happy with. I like to 'live with it' which drives my producers mad.

What’s the best piece of musical advice you’ve ever been given?
'What would you do if you couldn’t mess it up?' I use this for live shows, writing, videos, everything. Once the fear is gone, there’s just possibility left.

Where do you discover new music?
My friends and I still love radio! Oh and Transmission Records at the end of my road sells the best new vinyl!

What’s your favourite venue?
Dreamland! I recently moved to Margate and it’s turning into such a creative place for music and art. They are getting some amazing acts playing.

Who is your current favourite band/artist?
Crystal Bats are my fave band ever!!! I used to live with them, they have such an iconic look and sound. They need to be huge. Also Jerry Williams; no she’s not my little sister lol. She’s really great live and has great songs.

What inspirations outside of music impact your songwriting?
I think my friends and family are getting worried now coz I’m kinda going through them all, writing songs about them! I like to write about real emotions so if I feel someone going through something I’ll channel it. Also I tend to write the music video in my mind when I get sent a track and then write the words to the video.

What track of yours best represents your sound?
My new one What About Me – it’s produced by Will Vaughan who really gets my love of sickly sweet stuff, RnB, jazz and electro kitschness.

What’s next for you?
Putting out tons of music next year, gigging, making videos, rescuing more pets and getting my next kickboxing belt.