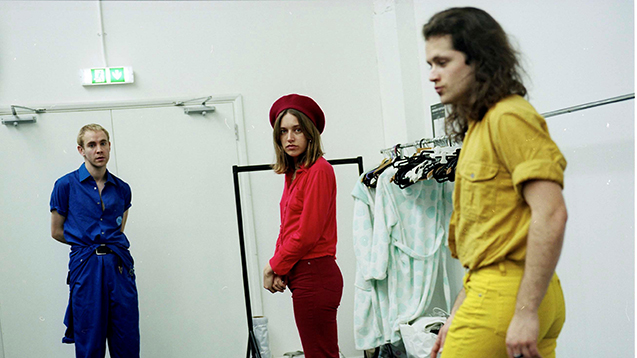 Channeling the ferocity of the Pixies and the sonic atmospherics of Yeah Yeah Yeahs, Whenyoung perfectly encapsulate the giddiness of young abandon. Meet the Irish pop punks here...

Limerick-raised, London-based Whenyoung first met as underage teenagers sneaking into a music bar. Bonding over cheap vodka and a mutual love of The Velvet Underground, it wasn't long before they did the inevitable and a band was born.

Two big city moves later (first Dublin and now London), theirs is a sound that perfectly encapsulates the giddiness of young abandon.

New single Actor produced by Chris Hayden (Florence & The Machine) is a pop-rock banger, reminiscent of the ferocity of the Pixies Gigantic and the sonic atmospherics of Yeah Yeah Yeahs Y Control, with lead singer and bassist Aoife Power's pure vocals adding a sugary coating.

Live, the band begin their show with a spellbinding recording of Patti Smith chanting 'when young', taken from the documentary Dream of Life, while their influences are a stylised mix of French cinema revolutionaries (Jean Luc Godard), iconic novelists (Hemingway) and outsider musical heroes (Brian Eno and The Cure).

Adding to their cool kid, DIY appeal, their band merch does a one-up on the standard band logo tee – opting instead for primary colour boiler suits in collaboration with Itchy Scratchy Patchy. 'A boiler suit shows much more of a commitment,' says guitarist Niall.

Fresh from supporting Superfood on tour, the trio have just announced headline and support dates for December, while Actor is out this Friday (24 November) via Hate Hate Hate Records.

What was the first song you developed an obsession for?
Aoife: Al Stewart, Year of the Cat. It was the most colourful album cover my parents had so I thought it was fun.
Drew: My Best Friend's Girl by The Cars, it was always in my dad's car.
Niall: Probably Billie Jean, I went to Michael Jackson when I was in my Mam's belly, she says that's why I came out so obsessed with music.

What’s the first gig you went to?
Aoife: The first proper gig I went to see was Pixies and Red Hot Chilli Peppers with my dad and my childhood best friend.
Drew: Probably a terrible battle of the bands show.
Niall: Michael Jackson pre-birth. Post-birth it was Spice Girls in the Point Theatre in Dublin, Baby Spice was my favourite.

What’s the first instrument you ever got hold of?
Aoife: Tin whistle.
Drew: Piano.
Niall: Guitar was the first.

What is your worst musical habit?
Aoife: Daydreaming and not listening to the boys when we're in our studio.
Drew: Dropping my sticks in rehearsal.
Niall: Turning myself up. Classic annoying guitar player.

What’s the best piece of musical advice you’ve ever been given?
Aoife: The best songs are the most simple songs.
Drew: Never judge an idea until you've tried it, think Neil Young said that.
Niall: Ideas and passion are more important than ability. Three chords are all you need and all that.

Where do you discover new music?
Aoife: Going to gigs in London. I'm not the best at finding new music though – I'm usually finding old music reading biographies, something like Please Kill Me gives lots of musical inspiration.
Drew: Meeting and speaking to other musicians I think.
Niall: Magazines like DIY and So Young are great for showcasing new bands these days. Also, just going out in Hackney and meeting people is how we've discovered a lot of new music.

What is your favourite venue?
Aoife: 100 Club. We've never played there but I love the atmosphere.
Drew: We played The Garage recently with Superfood and that was huuuuge for us.
Niall: Have a soft spot for The Shacklewell Arms. Had so many messy, memorable nights out there and it's run by great people. You can go there any night of the week and see bands for free.

Who is your current favourite band/artist?
Aoife: I've been listening to lots of La Femme. I think they're amazing.
Drew: The new Horrors album is top of my list at the moment
Niall: Shame are my favourite live band around at the moment. Baxter Dury too - the coolest.

What track of yours best represents your sound?
Aoife: A new song we wrote called The Others. It's pop and punk and sad and angry lyrically but musically happy.

What’s next for you?
Aoife: We're currently on tour with Superfood [at the time of interview] and when we get back to London we're playing more shows. Then going to write more songs and record lots more.