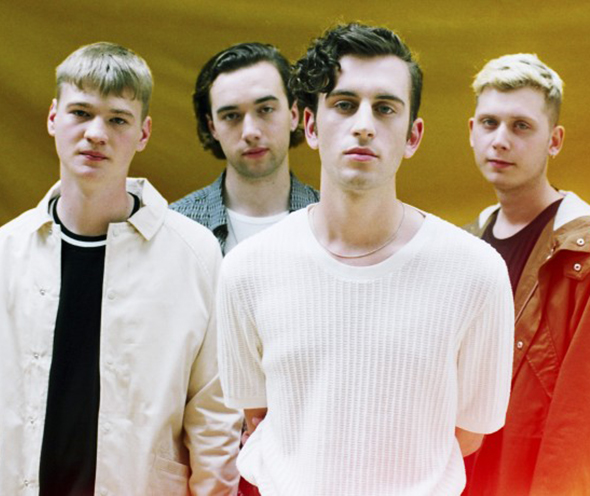 Vitamin are a brand new indie quartet from Leeds. Buzzing with happy vibes and widescreen electronics, their sound fizzes like a Berocca going off in a vodka Redbull. Tune in here...

Leeds quartet Vitamin pack as much indie goodness into their four-minute electronic pop songs as is humanly possible.


Buzzing with happy vibes and widescreen electronics, their sound fizzes like a Berocca going off in a vodka Redbull.

The four-piece collectively dropped out of college last year to concentrate on music and have since been on a touring spree that’s seen them hand deliver party-starting anthems to towns up and down the country.

Now signed to National Anthem Records, they’re preparing to follow in the footsteps of kindred spirits Haim and Chvrches and will release their debut album through the label.

With two kaleidoscopic EPs under their belts, Giving it Up and All We Know, and another 13 dates left on their tour, we somehow found some time in their busy schedule to learn more about their sound…

We first started writing music because…
When I was younger I never saw myself at all as a musician or even considered it, until this girl came into a school assembly and played the Harry Potter theme on the cello. For the life of me I have no idea why this twigged something in my mind, but all of a sudden I had a feeling of 'I could do that!!' Started playing the cello and absolute hated it, although I found singing the notes way more fun and I guess I've been singing and writing songs since then.

We have been making music since…
In various guises and combos we've been married to and playing music together for about six years. As us four, for two years.

Our music is…
We're really big on drums and vocal and I think that really comes across in our sound. We always try approach our beats with a little extra spice when writing them. Our drummer comes from a West Indian musical background, so that influence adds something really interesting to our sound. Electronics play a big part in our sound. We like the more leftfield side to electronic music and that's what we try encapsulate in our music. We like contrast, putting something a bit dirty next to something beautiful.

You'll like our music if you listen to...
Empire of the Sun, Friendly Fires, Discovery, Bombay Bicycle Club.

Our favourite venue is…
It would have to be the Brudenell Social Club in Leeds. We've played sooooo many times and each time it's still a treat. They've also kindly allowed us to take over the venue and cover it in sweets for our gig/club night residency that we put on monthly.

Music is important because…
It's the sound of a soul.

Our biggest inspiration is…
Musically we grew up through our teenage years listening to bands like The Maccabees, Foals and Bombay Bicycle Club. I think that the love for those bands you had when you're younger carries through into your own writing.

Although I find myself going back to the music of my childhood, stuff you would here in the back of the car on the way swimming lessons; a lot of soul and R&B, The Isley Brothers, Stevie Wonder, Curtis Mayfield, Tracy Chapman. Personally for me as a singer, Bjork such a big inspiration, her voice is so honest and pure.

Our dream collaboration would be…
Daft Punk. I think we would really suit each other and make something amazing. Caribou would also be so big...

To try us out, listen to our song…
Definitely listen to To Believe - it's our newest single and it captures everything we're about. It's exciting and heartfelt.

If we weren’t making music we’d be…
It doesn’t really bear thinking about, what could match the rush? Flying space ships or something? I’d be planting the first garden on Mars.