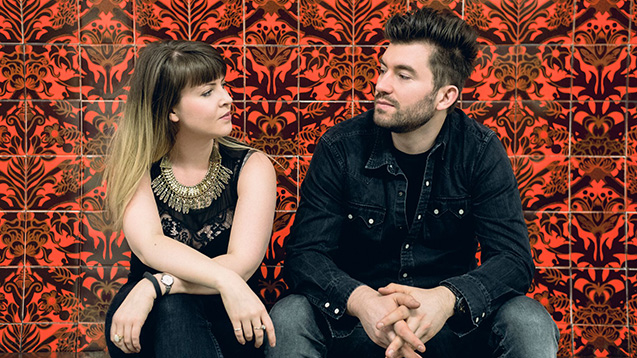 Back with a four-track wonder of warm, heart-felt duets that will have you dreaming of Nashville, we thought it was high time we caught up with alt-country duo Two Ways Home...

It’s been two years since the release of the pair’s acclaimed EP Better Days and now they’re back with a brilliant follow-up EP Closest Stranger – a four track wonder of warm, heart-felt duets full of beautifully blended vocals and take-me-to Nashville guitars.

Made up of Isabella Mariee, originally from Vienna, and Lewis Fowler who grew up in Gloucestershire, it seemed fitting that the country-inspired duo should find themselves in Tennessee's capital to develop their songwriting. It was there that they mixed and mastered the forthcoming EP, ready to bring 'a little Nashville-songwriters style to the UK'.

From Phil Vassar to Red Sky July, the pair have performed with some of country music’s most influential musicians and this summer played host to a series of nights in Soho showcasing the UK's thriving country music scene, in what they billed as 'London’s version of The Bluebird Café in Nashville'.

With the final date coming up in September, we thought it was high time we caught up with Isi and Lewis for a quick-fire round of questioning...

What was the first song you developed an obsession for?
Isi: Burn - Usher
Lewis: Bohemian Rhapsody - Queen

What’s the first gig you went to?
Isi: Mariah Carey in Vienna, when I was about 15.
Lewis: One of my dad’s.

What’s the first instrument you ever got hold of?
Isi: Piano.
Lewis: Guitar.

What is your worst musical habit?
Isi: Cramming in instrumental practice right before a gig.
Lewis: Dismissing songwriting ideas too quickly.

What’s the best piece of musical advice you’ve ever been given?
Isi: Don’t do what everyone else does. Find your own sound and stick to it.
Lewis: Originality is more important than technical ability.

Who is your current favourite band/artist?
Isi: The Common Linnets.
Lewis: Sean McConnell.

What inspirations outside of music impact your songwriting?
Isi: People watching at a coffee shop.
Lewis: TV series.

What track of yours best represents your sound?
Closest Stranger.

What’s next for you?
We have a lot of festivals and shows to round off the summer and then we will be releasing another exciting new song before the end of the year.

Closest Stranger is out now.