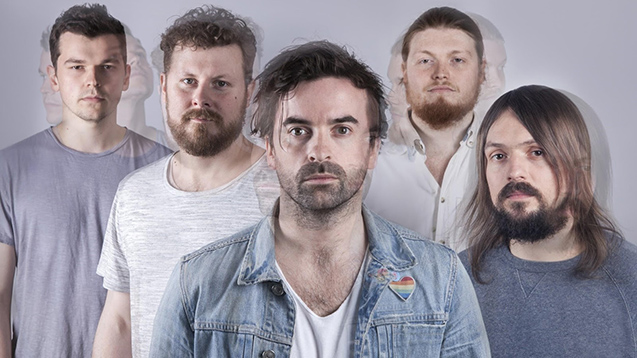 The Mancunian rockers bounced back from £30,000 worth of gear being stolen to deliver a gritty Americana record that channels The War on Drugs via Neil Young. We find out what makes Jo tick...

'Last night I dreamt of killing you in the most dark and beautiful way' sings Jo Dudderidge on the second single taken from The Travelling Band's new album, Sails.

It's tracks like these that exemplify the band's reputation for taking eighties heartland synth and roughing it up with their own brand of Mancunian grit – indeed BBC Radio 6 Music supporter Marc Riley has described the trio's sound as 'Mancunian Americana'.

Formed in 2006, 10 years of hard-hitting life on the road reveals itself on the new record. After making national headlines when their tour van and £30,000 worth of gear were stolen in Manchester, fans rallied round on social media which Jo says 'made us feel wanted and relevant to people’s lives'. The band went straight into the studio to record a live album, but two of the five remaining founding members jumped ship during the turbulent recording process.

As recording stalled, Jo took a trip to Nashville and was inspired by the thriving community among artists. He returned to Manchester and set up Pinhole Sound Studio with band-mate Adam Gorman. 'All the bands coming in to record at Pinhole Sound Studio gave us the impetus to finish our own record' he says.

Fans old and new will be glad they did: it's a rhythmic, driving force reminiscent of The War on Drugs via Neil Young. We caught up with Jo for 30 seconds to find out what makes him tick.

What was the first song you developed an obsession for?
Nirvana - Smells Like Teen Spirit.

What’s the first gig you went to?
Midnight Mass feat. Jesus, or The Who?

What’s the first instrument you ever got hold of?
The piano, aged five. Never managed to fully pick one up though. It’s a two person lift.

What is your worst musical habit?
My terrible ‘death stare’ which is basically my music 'concentration' face. I have this awful habit of staring right through people when I hear something that intrigues me. Apparently it makes people feel like they’ve done something wrong when in fact I’m just looking to the place that sound came from. Must learn to smile more in those moments!

What’s the best piece of musical advice you’ve ever been given?
More cowbell.

How do you discover new music?
Mainly in dreams.

What’s your favourite venue?
The Albert Hall in Manchester. It’s a big ambition to play there.

Who is your current favourite band/artist?
Elle Mary & The Bad Men.

What inspirations outside of music impact your songwriting?
Myths of the human condition.

What track of yours best represents your sound?
Right now? I’d say Loser.

What’s next for you?
After the album and UK tour? Making some new music with this great new band we have!

SAILS is out now via Sideways Saloon Records/Kartel Music Group.

Catch the band on their UK tour in November: