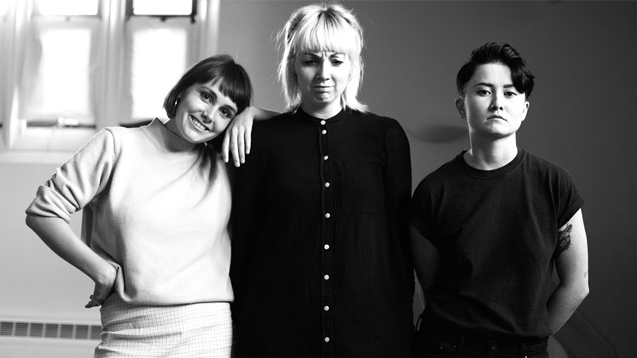 What have Newcastle three piece Tough Tits got other than the best band name in the world? An energetic, hook heavy punk squall - meet a trio with guitars set to stun.

Their debut release Hairless captures the band’s searing energy and spirit. It’s rough around the edges, synthy, full of feedback and as confrontational as only songs entitled Hairless, Fantasy and Nip Slip can be.

We first started writing music because…
Helen (H): Ayesha relocated to Newcastle and wanted to start a punk band; after recognising the lack of women in bands up here, after learning Liz was a drummer, she approached her and they began laying the foundations of some tracks. They recognised they needed more components to achieve more impact, and invited me along to trial some synth/bass over what they written.

I had a limited understanding of synthesisers, and only started playing bass when I joined the band; and so our approach to songwriting has definitely been more experimental, rather than structured and planned.

Liz writes the majority of lyrics, (aside from Hairless the title track of our debut EP, of which Ayesha penned). She writes honest, social commentaries, based on her personal experiences and everyday encounters (from the mundane to the extraordinary). The subject matters are accessible and honest, and are often discussed as a group before they are moved on from lyrics into song form.

Some topics may make the listener feel uncomfortable at times (Fantasy is about the gender role reversal of the lap dancing industry); however the aim of Tough Tits has always been to express our opinions without alienating our audience.

The band acts as a platform to express our ideals, our experiences and to vocalise what mutually pisses us off.

We have been making music since…
H: Around November 2015; although Liz and Ayesha had been laying the foundations of some tracks a few months previous to Helen joining the band. We played our first gig in December’15 and have been writing and performing pretty much non-stop since then.

Our favourite venue is…
Liz (L): I really liked playing The Old Police House in Gateshead.

H: In Newcastle, The Mining Institute. That we have perfomed in, DIY Space for London.

Ayesha (A): Mine was Power Lunches (RIP) but now it's probably DIY Space too

Music is important because…
L: For me it's a release of emotions and creativity, it gives me an excuse to procrastinate from the bad bits of daily life (working). I think music helps with most things, it's great.

A: I agree with Hells. I once met a girl who said she didn't really like music, but by the end of the night she was dancing and singing along and I thought 'you little liar'.

Our biggest inspiration is…
L: Daily life. Some of the songs I've written are love songs, some are angry and political, some are a bit of both. But generally I want them to be relatable and make people feel good or make them feel okay about not feeling so good.

H: The lasses we talk to at gigs who say they are going to start their own bands.

A: The stage and all the shy women that turn into powerful, assertive leaders.

Our dream collaboration would be…
L: Erica Freas - we played a show with her earlier this year and she's an incredible writer!

To try us out, listen to our song…
toughtits.bandcamp.com

If we weren’t making music we’d be…
H: Well, we all work full time alongside making music, so the answer would definitely be working!

In 10 years’ time we want to be...
H: Writing about something completely different.

Listen to the Hairless EP below.