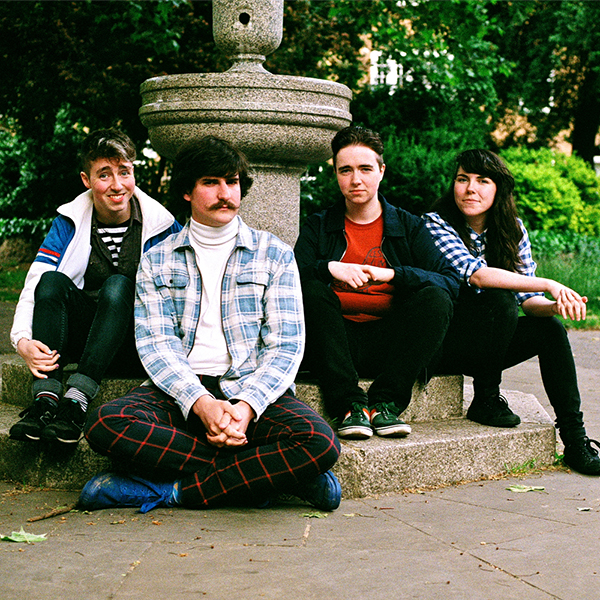 Edinburgh’s The Spook School use spiky punk rock as a vehicle to confront issues of identity and sexuality. Now on LP two, Try to Be Hopeful, they’re surrounding more brash and upfront than ever…

Since getting together back in 2012, they set off buzzing on the feedback of The Raincoats and Talulah Gosh, while taking inspiration from fellow DIY queer punk outfits such as Joanna Gruesome and Tuff Love.

They’ve since become leading lights in the burgeoning scene, moving from the lyrical innocence of their critically acclaimed debut LP Dress Up to the more muscular sound and honesty of follow up Try to Be.

Released by indie stalwarts Fortuna Pop this October and produced in part by Hookworms main man MJ, the record is direct, plaintive dissection of issues surrounding gender and stereotypes in these ever changing times.

It makes for a pert pop sound with anthems in making such as Burn Masculinity, being an optimistic shot in the arm for the disaffected everywhere. It should mean these music makers move to the top of their class in double quick time…

We have been making music since…
We realised how hard it is to talk to people. It's much easier to just sing our insecurities at people.

Our music is…
QUEER.

You'll like our music if you listen to...
Taylor Swift and Against Me!

Our favourite venue is…
JT Soar in Nottingham. Or Adam's old flat in Edinburgh.

Music is important because…
Sometimes it feels like you don't have a voice. Listening to music makes you feel like you have a really loud (and melodic) voice.

Our biggest inspiration is…
Anyone who stands up for other people.

Our dream collaboration would be…
Jedward and One Direction.

To try us out, listen to my song…
I'll Be Honest. Or any of them really. They're all pretty queer.

If we weren’t making music we’d be …
A little bit shier, a little bit lonelier and a lot more repressed.

In 10 years’ time we want to be…
Still friends and still loving being a really silly queer band together.

Try to be Hopeful is out now via Fortuna Pop.


New Music
Back to top
Close