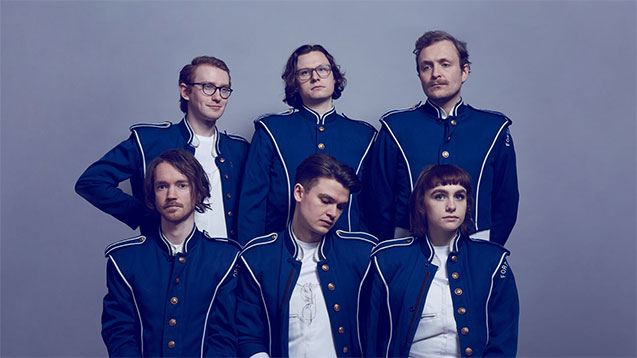 Meet Team Picture: a six-piece from Leeds whose fuzz-fused pop is the most heavenly we've heard in a while. We pick their brains ahead of the release of their new mini-album, Recital...

Meet Team Picture: a six-piece from Leeds whose fuzz-fused pop is the most heavenly we've heard in a while...

'We really resonate with the sincerity of pop music from the seventies and eighties, and the ability of so many bands from this period to transcend genre and remain influential,' says guitarist Josh McCarthy of their refined, synth-soaked sonics.

Backed already by BBC Radio 6 Music and tastemakers up and down the country, the band are gearing up for the release of their mini-album, Recital, released on limited 12" vinyl on 1 June.

Produced by Matt Peel (previously Eagulls, Autobahn and Pulled Apart By Horses), it's a bumper showcase of their sound, ranging from The Cure-era synth-wave goodness to down 'n' dirty bass and drums backed with howling vocals.

With a killer hook never far away, the sextet have built up a solid live show, picking up tour supports with Parquet Courts, The Orielles and Wire.

Ahead of their upcoming release party shows at London's The Shacklewell Arms and Leeds' Brudenell Social Club (see dates below), we caught up with guitarist Josh McCarthy to pick his brains...

Poison by Alice Cooper. I knew all the words by the time I was four. Thanks Dad.

Something really angsty. I think Trivium at the Manchester Apollo, in like, 2005. I was really super-metal for a while there in the mid-noughties. I was such a dweeb, I bought seated tickets because I didn’t understand how gigs worked and then I stood on the spot and headbanged for 45 minutes. There were three older dudes sitting behind me who just laughed at me for the whole show. They were right to laugh.

A keyboard, in primary school. It didn’t last long. I was not a talented or patient child. I’m not sure I fully understood what a keyboard was, and why it didn’t sound like a guitar. In fact I’m pretty sure I didn’t even know what a guitar was until I was about 14.

Not finishing things. I’m great at writing two minutes, twenty seconds of a song and then spending the rest of the day procrastinating in self-congratulation.

We’re pretty good at not listening to advice I think. Our producer Matt does a fairly fantastic job of being simultaneously lacerating and encouraging in his criticism. Honesty is best. It’s actually kind of a thrill when people just say they think something we’re doing is rubbish. You can do more with that than a ‘meh’ kind of response.

All over the place! But best is when you see a support band you didn’t have any expectations for and they turn out to be better than the headliners, and then you go away and try to feverishly reverse-engineer all the bits in their set you enjoyed by listening to all of their back catalogue.

The Brudenell Social Club is the throne room of music in the north of england, we’ve never played a bad show there. I don’t even think I’ve ever seen a bad show there, come to think of it. That stage just has a way of elevating things! Islington Mill in Salford is a fantastic space, too. We played a great Too Many Blogs show there last year. Would love to go back.

Yo La Tengo just released a new record, so that’s probably what I’ll listen to for the next few weeks.

Reading is best. When you discover a couple of writers who fill you with knowledge and power it’s like the most inspiring motivator ever. Also, I have about a hundred voice memos on my phone that I've recorded immediately after waking up in which I’m mumbling or humming something that probably sounded revolutionary at the time but now is completely incoherent, so there must be something going on in my dreams too, I just have no idea what it is.

Hmm! We’re wearing a bunch of different hats at the moment, and we’ve made a bit of a decision to separate all of the elements on Recital. I’m really proud of (I Have a) Little Secret, it’s not like anything we’ve recorded before, and we probably won’t record anything that sounds quite like it again either.

We’re releasing a seven-song record called Recital on 1 June. We approached it in two halves and recorded both sides with contrasting instrumentation. There’s a tonal lurch between side A and side B that we really like. We’re supporting Recital with a bunch of dates and festivals. Other than that, new things to see, hear, and touch are being worked on pretty much constantly. Can’t wait to share it all.