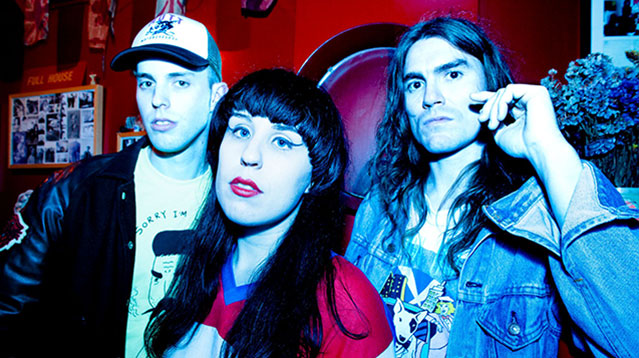 Birmingham trio Table Scraps prepare to unleash their howling garage sounds on the world this Friday in form of the gnarly new LP Autonomy.

It's home-spun, reverb-drenched bop-rock at its black-hearted best, with lead single Sick of Me already flying the band's grungy flag all over BBC Radio 1, Radio X and BBC Radio 6 Music.

The band formed after drummer Poppy Twist turned down a juicy record deal from a big label in her teens with former band Poppy & The Jezebels. Instead, she joined forces with bassist TJ and guitar wiz Scott Vincent Abbott to become a compact unit of raw energy and defiance.

The trio have since found their feet playing alongside Fat White Family, Black Lips, IDLES and Yak, as well as opening for iconic acts The Buzzcocks and The Gories.

Now with a handful of shows in the diary for February and March this year (info below) and a number of festival appearances slated for the summer, they're going to be busy exporting their noise around the UK this year.

What was the first song you developed an obsession for?
'Sultans of Swing’ by Dire Straits. It’s never gone away.

What’s the first gig you went to?
I have literally no idea!

What’s the first instrument you ever got hold of?
A seventies Zenta Telecaster copy, with a razor sharp bridge that would cut your hand to pieces.

What is your worst musical habit?
Forgetting my own lyrics.

What’s the best piece of musical advice you’ve ever been given?
Know when to use the 'proper' way of doing something, which is there for a reason, and when to do your own thing.

Where do you discover new music?
Usually word of mouth, recommendations from friends. It pains me to say but sometimes it pays to trust the algorithms on streaming sites!

Who is your current favourite band/artist?
King Gizzard and The Lizard Wizard take some beating. So prolific.

What inspirations outside of music impact your songwriting?
Books, films, anger, exhaustion, irony.

What track of yours best represents your sound?
The songs are varied. I’d say Lyin Thru Yer Teeth from the new LP is an abrasive starting point.

What’s next for you?
Our new LP Autonomy is out on 23 February and we’re ready to start recording the follow up imminently!