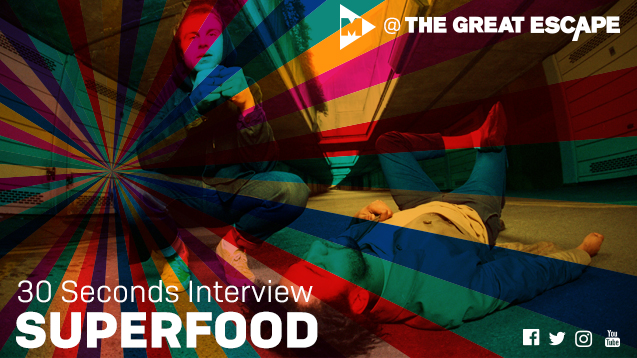 Forget your goji berries or pomegranate juice, Brummie outfit Superfood have all the vitamins you need with their youthful musical exuberance. Catch them live at The Great Escape…

Forget your goji berries or pomegranate juice, Brummie outfit Superfood have all the vitamins you need exploding through their technicolour musical exuberance.

Frontman Dom Ganderton cut his teeth producing early demos from the likes of Peace and Swim Deep before deciding to enter the fray with his own creations.

After the well received debut album, Don't Say That, the group have spent the last few years boiling up their sound, operating without any label or any outside backing, instead keeping it as DIY and as energised as possible.

The result will be their forthcoming second LP with the BBC Radio 1 played I Can't See being the first taste. It sounds as nonchalant and as a free as any mid twenty-something should and promises big things for their autumnal tour.

Ahead of those dates, you can catch them at The Great Escape tonight (19 May) at The East Wing. We spent 30 seconds with Dom ahead of their show to find out what keeps them inspired and how Birmingham legends Wizard were their first gig…

What was the first song you developed an obsession for?
Ghetto Superstar - Pras feauturing Mya & Ol' Dirty Bastard.

What's the first gig you went to?
Wizard, Cliff Richard & The Honeyz turning on the Millennium Flame in Birmingham's centenary square.

What's the first instrument you ever got hold of?
A cello at school but then I found my dad's guitar.

What is your worst musical habit?
Not finishing songs.

What's the best piece of musical advice you’ve ever been given?
Stay in your own lane.

Who is your current favourite band/artist?
Tommy Guerrero.

What inspirations outside of music impact your songwriting?
Love, drugs, cities, hope.

What track of yours best represents your sound?
Unstoppable.

What's next for you?
Festivals leading up to the release of the new album.

Catch Superfood playing tonight (Friday 19 May) at East Wing at The Great Escape. The group will be touring the rest of the UK in the autumn.

Listen to their latest tune I Can't See below.