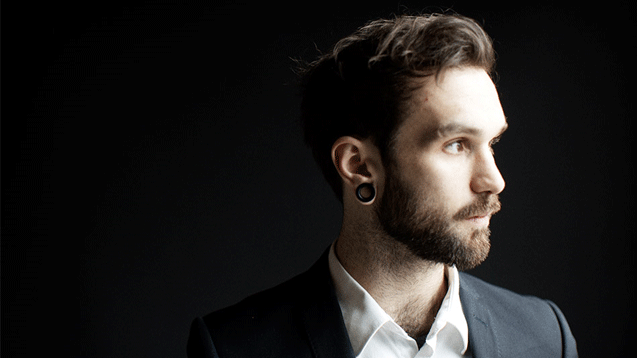 Stray Ghost is the alias of Oxfordshire-born, Brighton-based composer and multi-instrumentalist, Anthony Saggers.

Over ten years of soundscaping, Anthony has released eight full-length albums on grassroots labels including Hidden Shoal and Highpoint Lowlife, developing a contemplative sound which sits somewhere between neo-classical experimentalism and pastoral ambience.

Latest offering, A Shade Under 30, finds him at the piano with the barest of instrumentation, exploring themes of European disintegration, climate change and life in the digital age front and centre.

Ahead of its release via Phases Records on 23 November, we caught up with Anthony to delve into his world...

That would probably be Bela Lugosi's Dead by Bauhaus, at the age of around three or four. I used to demand that my dad put the vinyl on constantly. Bela Lugosi was one of my heroes. I guess I was a pretty gothic kid... The Ballad of Davy Crockett also - another one of my heroes, I loved that song. I developed an obsession for the music of Nick Cave and the Bad Seeds early on too, at around the age of 11, which has lasted a lifetime. There's a track dedicated to him on the new album even.

I have to admit that I don't remember any one gig making a lasting impression on me, as my first show at least. I used to put on and play a lot of shows in my home town when I was about 17/18; I remember how insane a lot of those were. I vividly remember watching bands like The Edmund Fitzgerald in Oxford growing up, they really blew me away. The Ed Fitz deserved to be huge....they've never left my MP3 player. I saw The Murder of Rosa Luxemburg and Eighties Matchbox B-Line Disaster at a very young age too. I was just in awe.

My father wasn't really well off enough to afford an instrument when I was young, so other than a horrendous plastic recorder at school, I guess it would have been a slow old PC at around the age of 18 with Fruity Loops installed on it. I used to have to stop making music whenever my Dad needed his PC.
That and I recently remembered that I used to make little tape collages on an old tape recorder using snippets of the audio files from Playstation discs, which could be played in some CD players. I'd say I was around nine years old, not bad ingenuity.

I suppose my worst habit might be considered the fact that I'm a brutal perfectionist; I can spend months mastering one piece of music. I think that's a double edged sword however, and something which many musicians and producers suffer from. On the new album, I self-consciously tried to stay away from what were becoming some of the cliches of the way I make music, and I think it shows. It's too easy, and therefore too lazy, to keep repeating yourself. Once you've perfected something, move on. Phil Spector didn't just write Be My Baby over and over...Oh, wait. Bad example.

Listening to my favourite artists, composers, arrangers and producers is always a form of taking advice on how you can go about arranging chords, sounds, ways of playing instruments and writing words...but I couldn't possibly decide the best of them all.

At the moment, mostly back in the 1960s via my local Brighton vinyl shops and YouTube.

I used to love the Oxford Zodiac. It was a sweaty theatre of dreams...but then Carling bought it. There are a lot of deconsecrated churches being used as venues these days, that's always interesting.

I couldn't possibly give just one answer. I'm currently listening to a lot of Tim Hardin, Lee Hazlewood, The Beach Boys and Dennis' solo and unreleased stuff. Also anything associated with Jack Nitzsche or Gold Star Recording Studio/The Wrecking Crew. I love that Wall of Sound technique, and that Gold Star echo chamber was like nothing else. I went through a heavy Scott Walker phase recently; I love the strings on those old Philips records, similarly with the Jackie Gleason Orchestra records on Capitol. I'd give anything to be able to get that sound. They both had a big influence on A Shade Under Thirty.

At this precise moment I have a big obsession with the song This Guy's In Love With You by Herb Alpert, written by Burt Bacharach and Hal David. The chord changes and arrangement in that are just... I'm floored every time. Burt's choices of chords are always a lesson in songwriting. I essentially have the musical tastes of an 80 year old at the moment, Jim Reeves and all.

I'm kind of a natural conduit for all of the melancholy surrounding me, of which there is much at the moment, so there's always that. Growing older was a big influence on the last album, along with the precariousness of large sections of - if not all of - humanity at the moment...without wishing to get all pretentious.

My relationship with my partner also provides me with daily inspiration, it's good to have a beautiful muse. Like Leonard Cohen said, 'a woman provides order' and I find that very true. I'm sure a psychoanalyst could have fun with that. Things aren't always easy, but therein lies the beauty of the struggle and that's where the best music comes from a lot of the time: close to home.

I must admit I have no idea how to go about answering that... after ten years my style has changed a little. I would say that the new album is the best place to start - it eclipses everything before it, in my opinion. Two Steps (A Life Lived Together) already has five million plays on Spotify, so that's clearly a popular one. Otherwise, if you want one of the older tracks, why not have a listen to The Hardest Choice To Make Is The Right One from the album So Much to Remember, So Much to Forget... I suppose that was the distillation of my catalogue for a while.

I've been working on a new collaborative album for Eugene Robinson from Oxbow, a follow up to Chalk White Nights which came out back in 2013. That promises to be something special, it ranges from film noir style jazz to noise rock, grand orchestral arrangements and even some bossa nova style lounge music! That one has taken me a long time and it's still not finished.

I've also started a new project under the name Vernon Spare, which is doing something completely out of type for me. It involves vocals and in all honesty it kind of came out of nowhere. I now have an album of fairly straight-up 1960s pop songs that I'm quite nervous but excited about. Hopefully something interesting will happen with that soon, I'm looking for labels at the moment.

As for Stray Ghost, we'll see how the new album goes. Hopefully I can follow it up with some shows and then get to work on a new album as soon as possible. I already have some ideas, I just don't know how I'm ever going to pull them off. That's always a good place to start.

www.strayghost1.bandcamp.com
New Music
Back to top